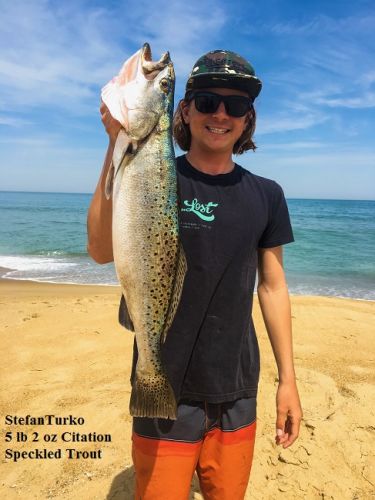 Fishing Report:
On the north end of Hatteras they have been catching Sea Mullet using mullet and shrimp. The Point caught citation Drum, plenty Sharks and Puppies. There were catches of Sea Mullet and Blow toads further south. North of the Inlet there are Sea Mullet, Trout, Puppy Drum and Joe White caught a keeper Striper. Stefan Turko weighed his citation Trout in at our Kitty Hawk store so I’m going to guess he caught it in that vicinity.
A few boats fished and caught some Yellowfin and Mahi. Nearshore Bluefish and False Albacore.
There has been some good Drum fishing inshore.
The Piers had another good Bluefish day yesterday. OBX also caught an Albacore and Jennette’s pier did also. There are Bluefish this morning and OBX has caught their first keeper Flounder of the Season.

The winds are S at 12 and the water temp is 54 degrees. Mostly sunny, breezy, small swells.