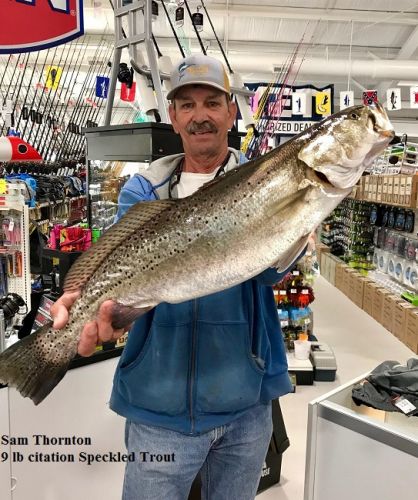 Fishing Report:
There were Bluefish and Spanish caught on the south end of Hatteras Island. The Drum bite was on at the point late in the day with more than a 100 citations. Bluefish, Sea Mullet and Black Drum were also caught along the Hatteras beaches.
The exciting news on this side of the bridge Sam Thornton caught 9 lb Speckled Trout surf fishing. I have never seen one or recorded one in the years I have written this fishing report.
It has also been a week all together with changes in the weather constant. There have been a lot of Bluefish and Trout, some Sea Mullet and Blow toads. Forecast for the following week looks good.
The fleet had a good day limiting out on yellowfin, a few Mahi, 100 lb Bigeyes, a 52 lb Wahoo and False Albacore. Nearshore trolling boats caught loads of Bluefish; some Spanish were caught as well. Inshore anglers decked Bluefish, Speckle Trout and Stripers.

The winds are NE at 17 and the water temp is 55 degrees. Mostly sunny, windy, choppy messy windswell.