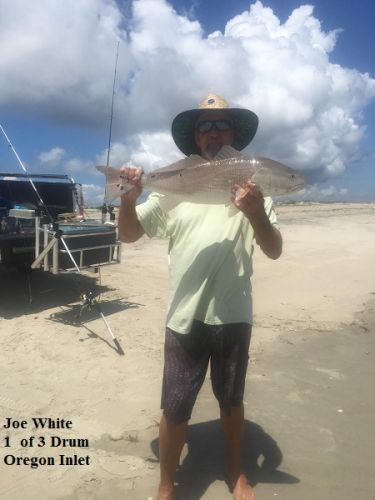 Surf Fishing Report:
Down on the Island there were a few Spanish, Sea Mullet, and a citation Pompano caught at ramp 49. On the north beaches some Spanish and Bluefish reported in S. Nags Head with Sea Mullet.

Inshore Boats/nearshore Report:
Nearshore anglers caught loads of Spanish and Bluefish with some kings. Inshore limits of Trout and Drum

Offshore Boats Report:
The weather turned around as it always does and the fleet had a killer day. Yellowfin, Blackfin, Wahoo and Dolphin. 2 White and 2 Blue Marlin were released as well.

The winds are SW at 9 and the water temp is 78 degrees. Sunny, light winds, flat Ocean.