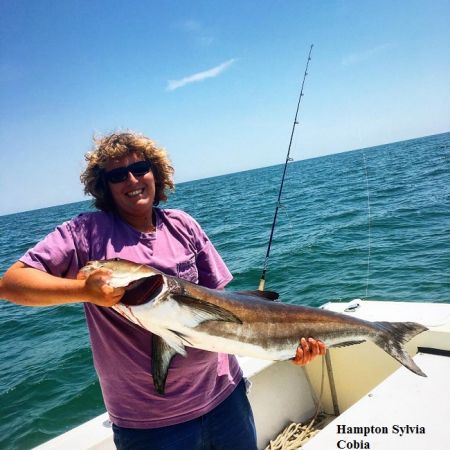 It was good fishing along the beaches. Plenty of Sea Mullet, some in the slot Puppy Drum, Bluefish, Pompano and Spanish. Surf fishing is good on the north beaches with anglers catching the same other then the Spanish.

The winds are SE at 2 and the water temp is 72 degrees.

The Little Bridge on the Nags Head/Manteo causeway reported Trout, 2 Puppy Drum, Black Drum and some Spot this morning.

Nearshore boats are catching Spanish and Bluefish. There was a good Cobia bite south of Oregon Inlet. TW’s Hampton Sylvia was in the middle of the bite. (Picture).

Offshore Boats Report:
The fleet caught plenty of Yellowfin and also found the Dolphin, some gaffers. A few Bigeye were caught and a white Marlin release.