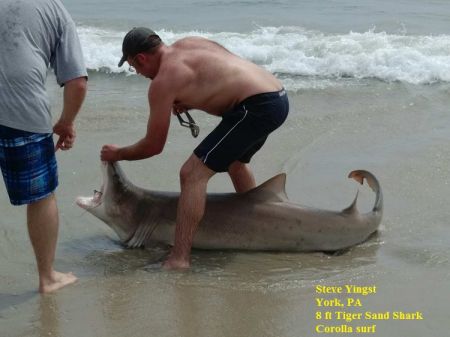 A few Sea Mullet, Flounder and Croakers were reported. Steve Yinst, the Shark angler said there were large schools of 8-12 in Bluefish boiling the water in the Corolla surf. He didn’t have any light tackle with him.

The winds are E at 1 and the water temp is 77 degrees. Calm Ocean, calm winds and sunny.

Offshore Boats Report:
Offshore anglers reached their limits catching Dolphin and caught plenty Yellowfin. There were some Blackfin and Wahoo in the mix also. There were Billfish releases, some trophy citations.