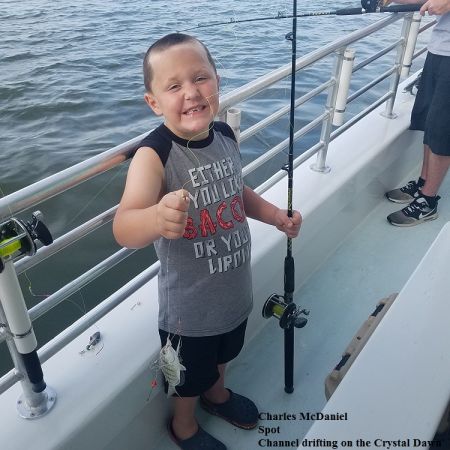 We had some serious lightning storms yesterday and 3 in of rain. There were 5 water spouts reported and one over the sound close enough to my house that I took pictures from my deck. I don’t have any surf fishing news this morning but I do have news of Charles McDaniel fishing on the Crystal Dawn and catching Spot. Every fisherman has had that look at some time while fishing. That is a great picture.

The winds are SW at 13 and the water temp is 71 degrees. Sunny, flat glassy water, light winds.

Offshore Boats Report:
The offshore boats caught good numbers of Yellowfin, and some Blackfin and Mahi. Trophy citation Big-eye were also caught with the biggest weighing in at 123 lbs. There were Blue Marlin and Sailfish releases.