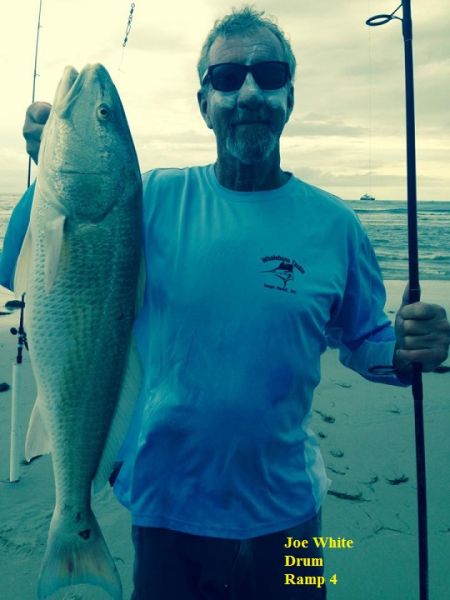 There were some good size Sea Mullet caught, some citation size, small Croakers and Flounder in the surf. Puppy Drum were caught as well. Joe White sent a picture of a whopper he caught this morning at ramp 4.

The winds are SE at 2 and the water temp is 60 degrees. Sun is shining, calm very cold water with small swells, no wind to speak of.

The Little Bridge on the Nags Head/Manteo causeway reported slow with some Trout, small Croakers and Drum.

Nearshore continues to have good King and Spanish catches plus Tilefish and Sea Bass. Sound fishing is good with anglers catching lots of Trout and Drum.

Offshore Boats Report:
The fleet had good catches off shore decking Yellowfin, plenty Dolphin, Blackfin and some Wahoo. There were Sailfish releases and Pirates Cove reported one boat had a grand slam.