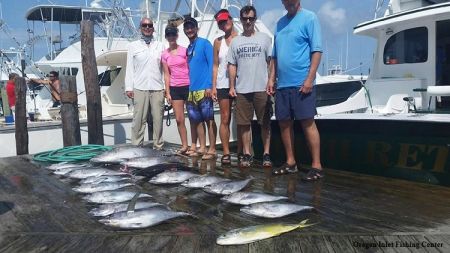 There were a few Puppy Drum, Sea Mullet and small Pompano caught along the beaches.

Often pompano are caught just off a few feet of the drop-off close to the beach where they are waiting for the sand fleas to be swept into their mouths by receding waves. They are fun to catch, because they are hard fighting fish and they feed anytime of the day.

The winds are S at 13 and the water temp is 75 degrees. Cloudy, expecting rain, chocolate water, choppy Ocean, windy.

Offshore Boats Report:
The blue water fleet had fair numbers of Yellowfin, Blackfin, Mahi and a few Wahoo. There were a few White Marlin releases.