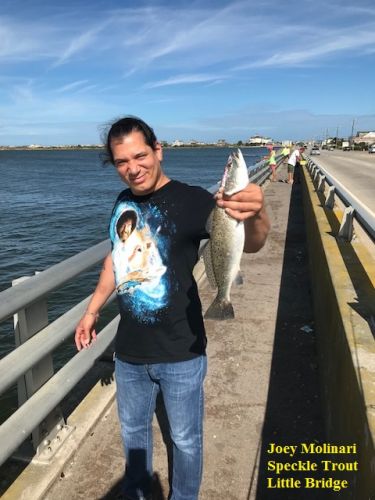 Columbus weekend has come and gone again, and no yellow bellied Spot. It is said if they are not here by Columbus Day, they will not show. We have not seen them for several years, but we keep hoping. Trout fishermen are out this morning trying their luck. There were some Sea Mullet and Croakers reported.

The winds are SW at 6 and the water temp is 71 degrees. Cloudy, calm winds, flat water. I was told the water is so muddy you could walk on it.

Inshore had limits of Red Drum, some Gray Trout, Flounder and Stripers. Nearshore saw catches of King Mackerel and Albacore.

Offshore Boats Report:
Only a few boats sailed yesterday because the Ocean turned a bit rough. Having said that they returned with some Yellowfin, Blackfin, Mahi and Bonita.