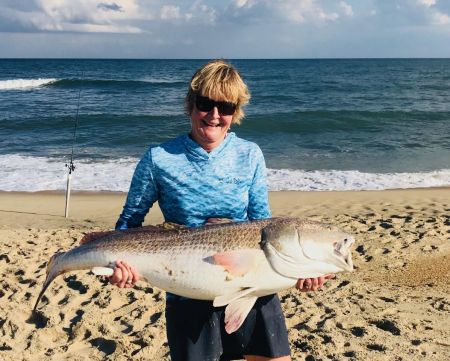 Send all questions and pictures to info@twstackle.com
In Summary:

Fishing Report:
There were a few Sea Mullet, Blues and Black Drum scattered yesterday on the north beaches. Bryce Howard caught a nice Drum Wednesday night and Kevin Manning caught a 23 in Drum in S. Nags Head. On the south beaches Avon had a good Sea Mullet run, Bluefish, Trout and Puppy Drum. Linda Harper caught a nice size Red Drum from the surf in Avon. Buxton reported Trout and the point have had Shark for the last several days. Frisco also have Trout.
Avalon Pier weighed in a citation Sea Mullet this morning and caught some Blues, Sea Mullet and Black Drum Yesterday. Jennette’s hours are from 9-5. They are not open when I write the fishing report but they caught Blues, Trout and Flounder Thursday.
The fleet had an excellent day returning to the docks with plenty Yellowfin and Blackfin.

The winds are N at 20 and the water temp is 55 degrees. Sunny, windy, white caps, chilly morning.