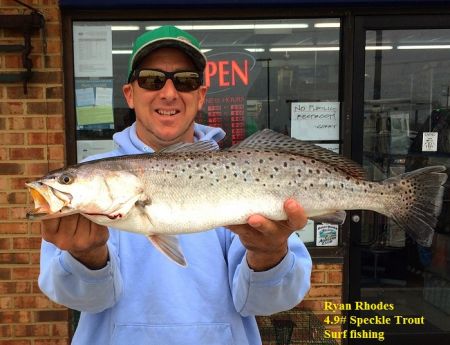 North of the inlet there are Bluefish and Sea Mullet.  Also our Trout fishermen are having good luck with some nice keepers. Ryan Rhodes caught a 4.9 # Speck using jig with a chartreuse gulp on a double rig. It was almost there but no cigar. A citation Speck is 5 lbs. Ryan is an avid Outer Banks fisherman and creates some great videos.

The wind is NE at 20 and the water temps is 61 degrees. It is a gloomy day and misty. The water is clear this morning and we all know that means Bluefish and Trout.

Offshore Boats Report:
The Dolphin fishing was over the top for our Bluewater fleet. All boats catching their limits with a good number of gaffers. Also a Wahoo was caught and a White Marlin release.