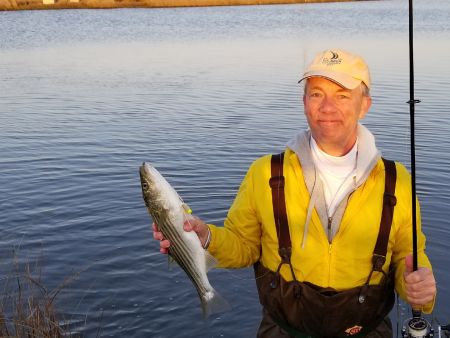 Send all questions and pictures to info@twstackle.com
In Summary:

Fishing Report:
It is a beautiful day on this sandbar. I am a happy person. The water temperature has finally hit 50 degrees. It is another windy day and a problem for the anglers but fisherable.
There were a few scattered Sea mullet reported in Nags head and a 31 in Drum caught south of the OBX Pier. Also Jonathon Edgar caught a 27 in Drum south of the Kitty Hawk Pier.
The Point reported big Bluefish along with some Red Drum. Avon and Buxton beaches caught some Blowtoads and Sea Mullet.
The Little Bridge catching plenty Shad and a Bluefish yesterday.
Jim Trost sent news it was a good Striper day in the Nags Head sound.
The Piers are slow this morning. OBX caught loads of shad yesterday on artificial lures, some Sea Mullet and Croakers. Avalon caught four 18-20 in Specks yesterday. Can’t keep em, but fun to catch.
The fleet did not venture out again due to the windy conditions.

The winds are NW at 14 and the water temp is 50 degrees. Sunny, chilly morning, sweeping north swell, windy.