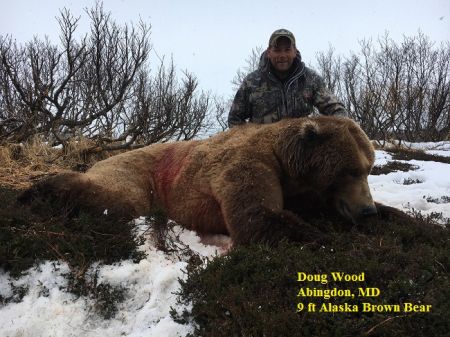 Surf Fishing Report:
There were big Mullet and Pompano in Buxton and some Blues, Sharks and Cobia at the point. Frisco also had big size Pompano along with Sea Mullet, Black Drum and Puppy Drum. Further north Avon caught Bluefish and Puppy Drum. And even further north than Avon there were Puppy Drum on this side of the Bridge. Also some scattered Sea Mullet.
I understand from e-mails I have received there is some static circulating over my reporting about the good Red Drum action we have had the last several weeks at the point. Really……If I or Red Drum or Frisco Rod and Gun had not, it’s all over Face book. I could probably tell you where some anglers had breakfast. Fishing is our business, reporting what fish are biting is my job.
Anyway, having said that, Cape Point closed last night at 12 to all ORV access due to bird nesting. Keep the lines tight.

I received my yearly picture from Doug Wood. This is the first Alaska Brown Bear picture he has sent and it is a big un. The bear was harvested May 15th,

Offshore Boats Report:
The weather made deep Sea fishing a little iffy but they manage to catch some Yellowfin, citations Bigeyes and plenty Dolphin. It turned into a good day.

The winds are S at 12 and the water temp is 63 degrees. Partly cloudy, nice swells, breezy.