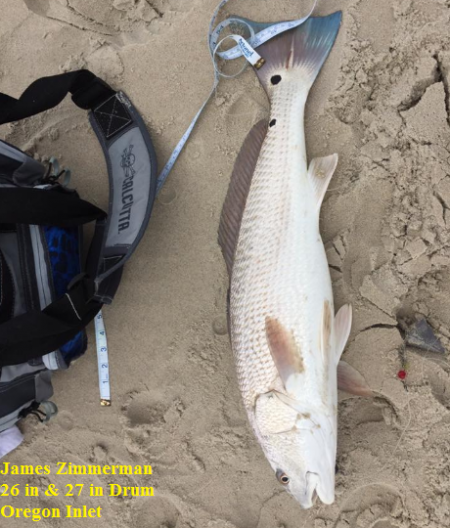 Surf Fishing Report:
Bluefish and Sea Mullet are scattered on the Avon and Buxton beaches with some Puppy Drum. There were Sea Mullet along the Frisco beaches with several citation Pompano.
Jerry Zimmerman caught a couple 26 and 27 in Puppy Drum at the inlet. He said he caught them before the grass got so bad he couldn’t keep his line clean. He finally had to give it up. And we have Sea Mullet and small Bluefish.

Inshore Boats/nearshore Report:
There was a significant amount of keeper Cobia caught inshore and nearshore. A 90 pounder was weighed in. Also Bluefish and Spanish as well.

Offshore Boats Report:
It was another good meat fish day for the offshore fleet. Many Dolphin, Yellowfin, Wahoo and Bigeye fishing was over the top. There were loads of Bigeye citations weighing in from 100 lbs to 194.

The winds are SW at 17 and the water temp is 58 degrees. Partly cloudy, expecting rain through Wed, nice swells, breezy. Surfers are out.