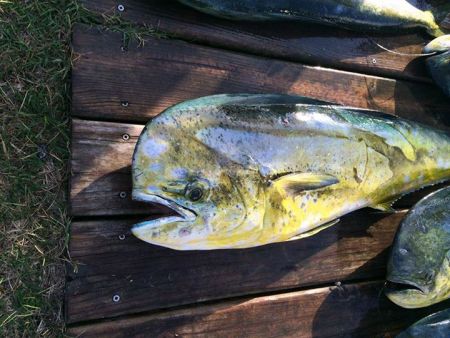 Surf Fishing Report:
The day was mostly sunny and fishing picked up from the surf. Everything is getting back to normal. I see some beach combing going on early.  Lots of people on the piers this morning.

Sea Mullet, Bluefish and Pompano were caught along the south beaches yesterday with small Flounder in Avon and a couple of keepers in Buxton. We also have Sea Mullet, Croaker and Bluefish scattered north of the Inlet.

Sound Fishing Report:
The Little Bridge on the Nags Head/Manteo causeway reported Trout, Stripers, Flounder, Spot, Sheepshead, Bluefish and caught a Catfish that I predicted earlier this week would happen with all the fresh water.

Inshore Boats/nearshore Report:
Nearshore anglers caught False Albacore, Spanish and Bluefish. Inlet boaters are catching bottom fish, some Bluefish and Sheepshead around the bridges. Stripers and Trout are in the sound.

Offshore Boats Report:
Mahi, Wahoo and Tilefish were brought back to the docks so it was a profitable day for the fleet.

The winds are SW at 14 and the water temp is 69 degrees. Mostly sunny, small swells, breezy.