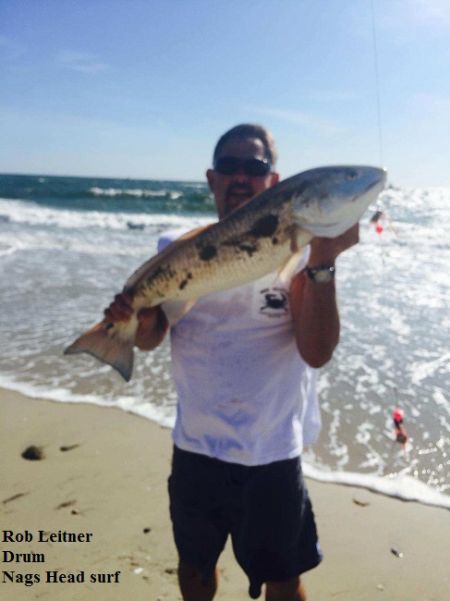 In Summary:
Send all questions and pictures to info@twstackle.com
Surf Fishing Report:
Sea Mullet were caught along all the beaches and a few Bluefish in Avon and Pompano at ramp 49. NPS opened a path to the west side of the point and it was reported Spanish and Bluefish were thick hitting on lures. Only a few bottom fish on the north side of the inlet. I received and early morning e-mail with picture of Rob Leitner and a Drum he caught this morning in Nags Head.

Offshore Boats Report:
The Billfish numbers increased yesterday making it a good day for the Sports fisherman. There were Wahoo and Gaffer Dolphin caught and plenty of Tilefish. Also a 200 lb Shark release.

The winds are SE at 2 and the water temp is 77 degrees. Sunny, no wind, flat Ocean.