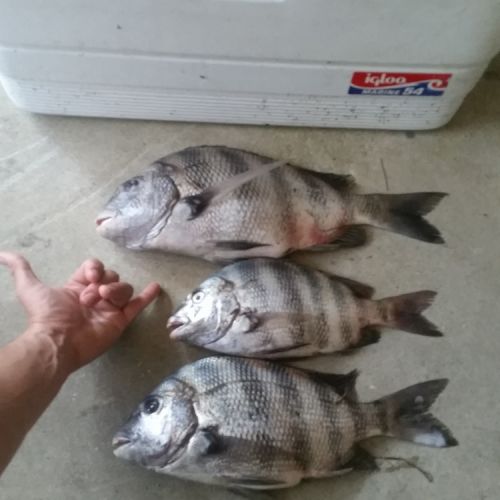 Brandon Jenkins had a good Sheepshead day at the Inlet Bridge. Brandon’s bait was sand fleas.

The winds are E at 4 and the water temp is 68 degrees. Nice clean small waves, light winds, sunshine, people sitting on the beach early.

The Little Bridge anglers have had a good week catching some keeper Trout on the Nags Head/Manteo causeway.  This morning there are small Black Drum.

Outer Banks: Good Spanish and Bluefish off the end, Sea Mullet, Croaker, Pigfish and a Pompano off the bottom.

Nearshore had great Spanish and Bluefish action and some Amberjack. Inshore also caught Spanish and a 55 lb Cobia. The Headboat sailed and reported Sea Mullet, Black Sea Bass, bluefish and Pins and Pigs.

Offshore Boats Report:
Fishing was much better for the fleet yesterday. With Bonnie out of the way, all the fleet sailed. They had good numbers of Dolphin; some of the boats limited out on Yellowfin and caught Blackfin as well. Also Billfish releases.