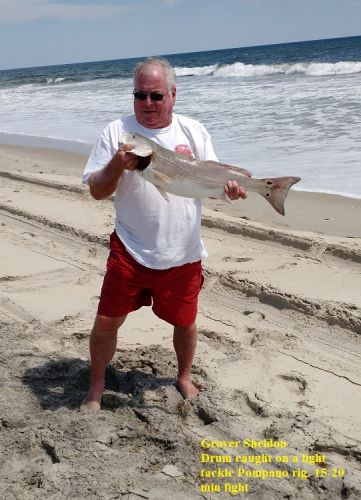 It is a good day at the beach. We have Carolina blue skies, the water is warm, and wind is calm. A few surfers are sitting on their boards. A few bottom fish are along the beach.

Jennette’s: Bluefish, Sea Mullet and Spot. A 33 in Albacore was released early morning.

Inshore Boats/Nearshore Report:
Near shore anglers are catching nice Ribbonfish and King Mackerel. Also a few Spanish and Blues were added to the report.  Inshore boaters released many Red Drum and added keepers to their fish boxes. There were also plenty of Ribbonfish and Shark for the inshore anglers.

Offshore Boats Report:
It was a good Dolphin bite with plenty of gaffers. There were White and Blue Marlin releases and a few Sailfish.