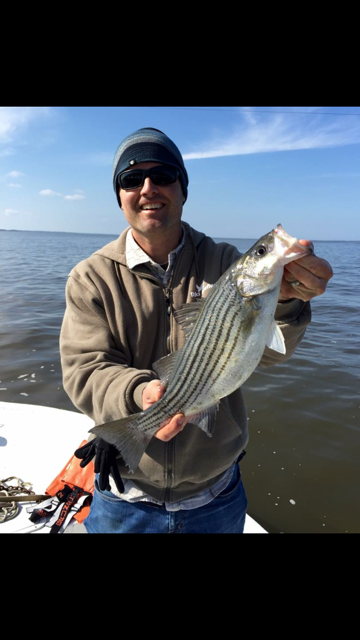 It’s an overcast morning here on the Outer Banks with the winds out of the north-northeast around 10 to 15 knots and an air temperature of 43 degrees. The ocean today is fairly calm with a water temperature of 41 degrees and moderately clear. Why sit inside when there are fish to catch?!

The reports for the northern beaches have remained about the same with Dogfish and Skates being caught. I talked to a few people that took a day trip to Ocracoke yesterday and said that the Puppy Drum fishing was extremely good along the beaches down there. From what its sounded like, at times, it was almost every cast fishing in those deep sloughs.

Sound Fishing Report:
Finally, I have a sound report for this morning! Yesterday there were some Stripers caught throughout the sound. I heard of Stripers caught on the Currituck Bridge, Manns Harbor Bridge and also in some of the rivers and creeks on the west side of the sound. Hopefully it continues!

Inshore Boats Report:
There are a few Stripers around the bridges, but as far as inshore in the ocean, not so much.

Offshore Boats Report
I do not believe that anyone made it to the Gulfstream yesterday because of the winds offshore however the fleet was headed that way this morning. Hopefully this afternoon we will see multiple boats with a box full of tunas!