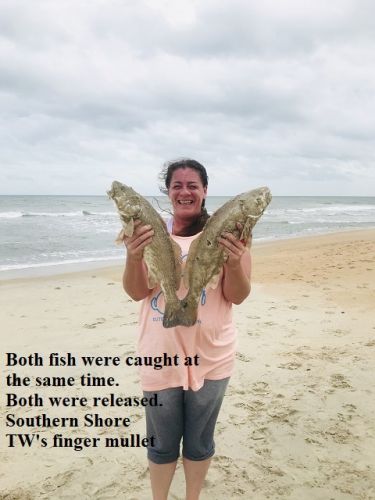 Surf Fishing Report:
Sea Mullet and Drum were reported on the south beaches and a few Drum, Trout and Sea Mullet on the north beaches. The winds were up to 40 by 2 clock and that was about the end of the fishing for the day.

Sound Fishing Report:
The Little Bridge on the Nags Head/Manteo causeway reported catching Drum. I heard there were Drum anywhere you fished on the causeway before the winds got up.

Inshore Boats/nearshore Report:
A few nearshore boats fished the Inlet and and a short distance off shore along the beach and caught Red Drum and False Albacore.

The winds are NW at 8 and the water temp is 68 degrees. Mostly cloudy, breezy, flat choppy Ocean