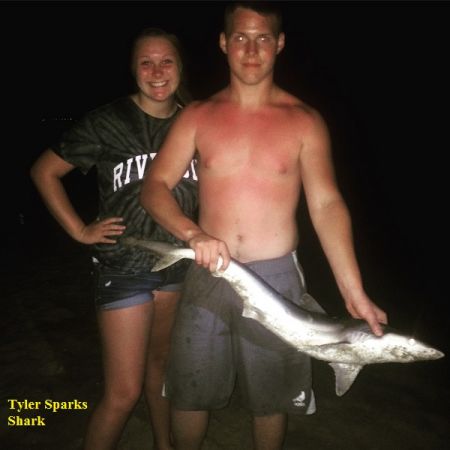 There were a few bottom fish caught from the surf yesterday. It was overall slow going. I am getting more than the usual Shark pictures this year. It is not unusual to have a good number of Sandbar Sharks or Atlantic Sharpnose Sharks caught from the surf in the summer.

The winds are SW at 13 and the water temp is 63 degrees. The water is calm and murky.

Inshore Boats/Nearshore Report:
A super day for the nearshore fleet bringing back to the docks limits of Amberjack, Bluefish and Cobia. Inshore boats slay the Blues, Spanish and Flounder. One Captain caught a 64 lb Cobia. The inlet boats are catching Gray Trout, Croaker, Sea Mullet and Flounder.

Offshore Boats Report:
What a day for offshore fishing! The fleet limited on Dolphin. Caught boat loads of Yellowfin, Blackfin and limits of Amberjacks. There were Wahoo, and a couple of king Mackerel thrown in. There were Blue Marlin releases