67 Years of Solid Comfort and Pleasure 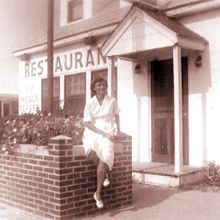 1947 the nation was less than two years removed from the hard-won victory of World War II. Average annual income was $2,850. A new home averaged $6,600. Gas was 15Â¢ a gallon.Â Polaroid's Land camera introduced the world to the 60-second snapshot, and U.S. Air Force Capt. Chuck Yeager broke the sound barrier over the Mojave Desert in the rocket-powered X-1 research plane.

That same year the Colonial Inn opened its doors just as the Outer Banks and its pristine beaches were being discovered by America's first generation of automobile tourists. Consisting of a series of stand-alone bungalows facing a longer building housing individual guest rooms, the original Inn featured a roadside restaurant that for years served the Inn's guests as well as countless locals.

The Colonial Inn's fortunes rose along with those of the Outer Banks. One of the Inn's early brochures reads, "Here you can relax in solid comfort while you enjoy all of the 101 sights and sports in this vacation wonderland." Even in the early 1950s, it seems, the Outer Banks could be a remarkably "happening" place. Located within sight of the Nags Head Casino, the Inn and its restaurant capitalized on the crowds drawn to the beachside hotspot by the likes of Artie Shaw, Woody Herman, Duke Ellington, Count Basie and Louis Armstrong. And, of course, the Inn's perch at the edge of the Atlantic and its proximity to so many of the Outer Banks' quintessential attractions, from its lighthouses to Jockey's Ridge to The Lost Colony's Waterside Theatre, also contributed to its popularity.

The Colonial Inn's service and amenities were also a draw. The brochure's editorial goes on to note that, "Each unit has its own private tub or shower bath," apparently quite a feature back in the day. The Colonial Inn Restaurant, it says, "...is famed for fine food."

Always the best and freshest sea food in wide variety; a meal or a snack to delight your every taste whim." And don't forget, "Colonial Inn is close to all amusements...Bingo is within a block." Ah, they don't write promotional copy like that anymore.

Among the duotone photos of local attractions framing the brochure's interior is one that might raise a few eyebrows today. Right up there with the Wright Brothers Memorial, shipwrecks on the beach and Bodie Island Lighthouse is a photo of six bathing suit-clad young women above the caption "Beaches Abound With Beauties Like These." Yes, indeed, these were different times.

To modern eyes, the brochure's contact information appears woefully insufficient. Write or phone for reservations, the brochure suggests. But there was no street address listed - at that time Colonial Inn, Nags Head, N.C. was all the address necessary. Writing and mailing a reservation request...can you imagine? And the phone number? Just dial 8561!

The Colonial Inn's heyday continued through the 1960s, 70s and 80s, as more and more vacationers from the eastern U.S and beyond discovered the Outer Banks and its spacious, relatively undeveloped beaches. Along the way the original bungalows were replaced with the present brick structures, and in the 1970s the restaurant was eliminated to make way for a new accommodations industry standard - a swimming pool. But by the 1990s visitors' tastes and expectations were changing, and the Colonial Inn was showing its age.

By 2011 the Colonial Inn was on the market, and Realtor David Weybright brought the property to the attention of Edward "Monty" Blanchard, an eastern North Carolina native living in New York City and working in the financial industry. Blanchard, who has longstanding family ties to the Outer Banks, had originally been in the market for beach houses but found the motel an interesting and challenging option, becoming the Colonial Inn's new owner on Memorial Day 2011. 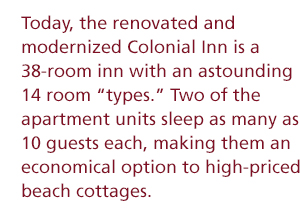 Blanchard knew that substantial upgrades were necessary because the previous owners had not maintained the behind-the-scenes infrastructure of the four-building complex. Despite the magnitude of the required repairs and upgrades, Blanchard was committed to maintaining what he called "the character and soul" of one of the oldest surviving motels on the Outer Banks.

According to the Colonial Inn's General Manager, Joshua Roseberry, essential structural repairs were addressed first. Then extensive plumbing repairs were made and a new in-line hot water system was installed in each building on the property. Blanchard's renovation team purchased all-new beds and bedding. Carpets were replaced throughout.

In year two the focus switched toward décor upgrades, with the entire complex, from individual guest rooms to common areas to rarely seen staff areas, repainted in bright, beachy colors. The works of local artists and photographers were purchased and displayed. All windows were replaced and new window treatments were designed and installed. The full-sized pool was completely renovated, its infrastructure getting a complete overhaul, transforming it into one of the Inn's best amenities. 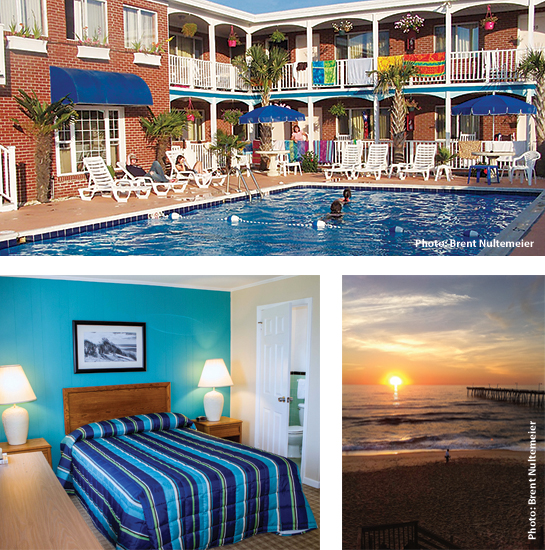 Now in the third year of its transition, Roseberry notes that the Colonial Inn's upgrades and renovations have progressed to replacement of all exteriors doors, installation of new heating and cooling units and all-new lighting fixtures. Guests can watch flat screen TVs while relaxing on brand new couches, loungers, chairs and stools. WiFi has been installed throughout, and a new property management system is in place.

Today, the renovated and modernized Colonial Inn is a 38-room inn with an astounding 14 room "types." Guests can choose oceanfront or oceanside accommodations ranging from a standard hotel room to efficiencies to full-blown two-bedroom apartments with full kitchens. "Two of the apartment units sleep as many as 10 guests each," say Roseberry, "making them an economical option to high-priced beach cottages."

The Colonial also offers specific pet-friendly accommodations for those traveling with their furry friends.

Throughout all the changes, the Colonial Inn has benefitted from the loyalty of its employees, some of whom have been with the hotel for a dozen years or more. This loyalty, in turn, benefits the Inn's guests says Roseberry, noting "The Colonial Inn consistently receives Certificate of Excellence awards from TripAdvisor."

And, you guessed it, the combo of affordable accommodations and great service has translated into a loyal clientele. "We have guests who've been returning to the Colonial Inn for 15 years," Roseberry says.

Sixty-seven years after first opening its doors, the Colonial Inn and its loyal staff are still doing all they can to make each guest's stay "one of solid comfort and pleasure."

Show this coupon to receive offer.