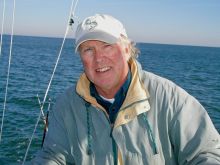 The blue marlin moves gracefully, its body under perfect control, quietly gliding into the baits in no particular hurry. A long, powerful fish with a spiked bill, formidable shoulders and a scythe-like tail, the marlin’s pectoral fins light up in the most astonishing electric blue. In the blink of an eye it breaks the surface, bursting through the water in a neon arch, sharp scales vibrating with power, gills flaring in a plume of mist, snatching the bait and plunging beneath the surface 50 feet from where it began. The blue marlin is more than just a fish. For the captains of the Albatross Fleet in Hatteras Village, the marlin represents history, tenacity and a little bit of magic all wrapped up in its neon blue pectoral fins.

The original charter fishing fleet on the Outer Banks, the Albatross Fleet is a true pioneer in sportfishing; in fact, the art of catch and release fishing in North Carolina was born on its boats. From its beginnings in 1937 to the present day, the Foster family has fished on their fleet of round-stern boats with distinctive candy-striped outriggers, created specifically for the waters off Hatteras. Their proximity to the Gulf Stream is a key advantage for the Albatross Fleet in the pursuit of marlin and other big game fish. And, through the years, the blue marlin has played a role in the Albatross Fleet’s exciting history and present-day lore.

In 1951, current Albatross Fleet owner Ernie Foster’s father, Ernal, caught a 475-pound blue marlin. While a larger marlin had been caught in 1939, any recognition was lost to World War II. This time, however, Aycock Brown, newly minted Director of the Dare County Tourist Bureau, used Foster’s catch as a major publicity tool for fishing in Dare County. “All of a sudden, Hatteras became the place to go to catch a blue marlin,” says Ernie. Ernal Foster’s brother, Bill, would follow up this feat in 1962 by breaking the world’s record with his catch of a blue marlin weighing 810 pounds, an accomplishment that Aycock Brown would also use to stoke the promotional fires of Hatteras sportfishing. 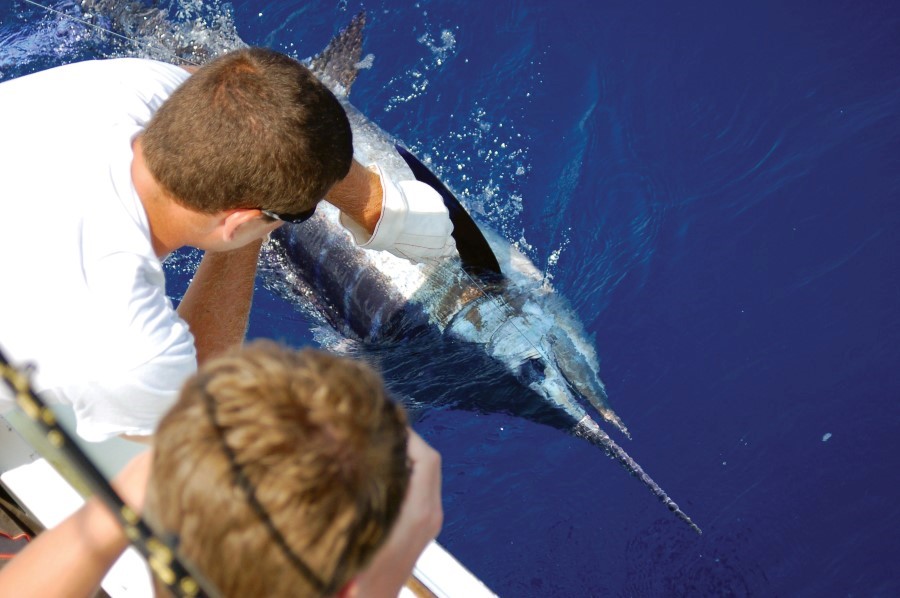 Another milestone of consequence occurred in 1958, when a honeymooning couple came to Hatteras to fish with Bill Foster. “They caught a marlin and asked him to do the craziest thing anyone had ever heard of: They asked him to release the fish alive to live and fight another day,” says Ernie. At that time every catch was brought back to the dock, and the notion of releasing a hard-fought marlin seemed outlandish, but eventually the idea took hold. Today, catch and release sportfishing is considered the norm across the world.
If you’re ready to take the plunge into the world of sportfishing you might be wondering, what’s it like to hook a marlin? Albatross Fleet Captain Bryan Mattingly gives the rundown. Bryan says that sometimes the marlin’s colors are so brilliant you can’t make out the fish in the giant green-yellow glow. “They light up everything,” he says. The bright and brilliant fish, which typically weigh anywhere from 150 to 750 pounds can even change colors, tipping the captains off to its behavior. “They’ll be hanging back, then light up and come at the bait,” Bryan says. This is when the epic battles happen: you’re in The Old Man and the Sea territory now. 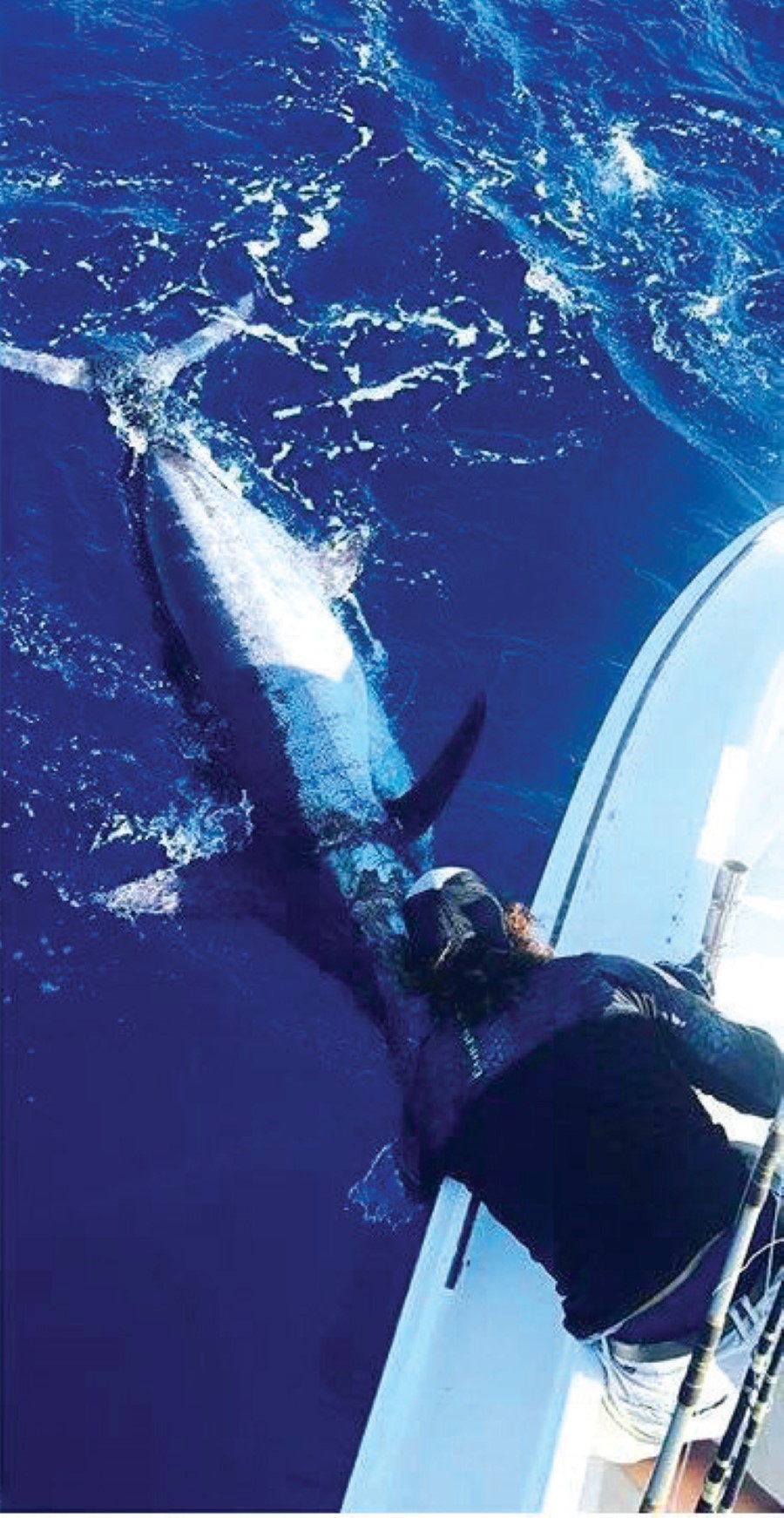 The adrenaline rush of hooking a marlin is memorable, but the captains must stay calm and strategize. Ernie Foster recalls the most memorable day in his fishing career as a routine charter on a calm day. When, after several hours they had only caught two small dolphin, the frustration of bad fishing luck set in. Then, while trolling for tuna, Ernie recalls a dark purple form emerging under the bait, not more than 50 feet from the boat. It kept growing. “In the quickest instant in fishing, a blue marlin exploded on the bait and it disappeared with the monster fish in a swirl of blue water and white spray that seemed half as big as the boat itself,” Ernie says. “In that brief instant we had traveled from frustration and boredom to being hooked up to 500 pounds of serious fish!” The battle that ensued would reach epic proportions.
“All hell broke loose!” Ernie says. The cockpit came alive as the marlin ripped off 100 yards of line, diving straight down then exploding to the surface astern. The marlin performed a series of jumps so rapid the reel began to ooze grease from the end plate. Ernie weaved the boat through the remaining five lines, racing frantically in reverse after the marlin. Down to their final 20 yards of line, Ernie backed down and his angler cranked as fast as possible. The fighting harness came out, and within five minutes they’d retrieved 100 yards of line. “With a blue marlin, nothing is very predictable,” Ernie says. After gaining on the fish, it would realize the boat’s strategy and change tactics multiple times.
Four hours passed with the marlin countering every strategy Ernie executed. Emotions on the boat ranged from excitement to anxiety to fatigue to anger, but as the fifth hour took hold, Ernie says, “Watching such a magnificent creature fight on with such stubborn tenacity for so long began to have a deep impact on me.” He came to understand and anticipate the marlin’s maneuvers, and at six hours and 50 minutes, they had their chance. In a series of literature-worthy moves, they caught the marlin and set it free to fight another day. “During seven hours of struggle the marlin had physically pulled us 10 miles to the east, had carried us across a range of emotions that shocked us all and left us with a sense of awe and satisfaction like no other angling feat I had ever experienced,” Ernie says. The drama and narrative of fishing lore came alive that day, and it can for you too. 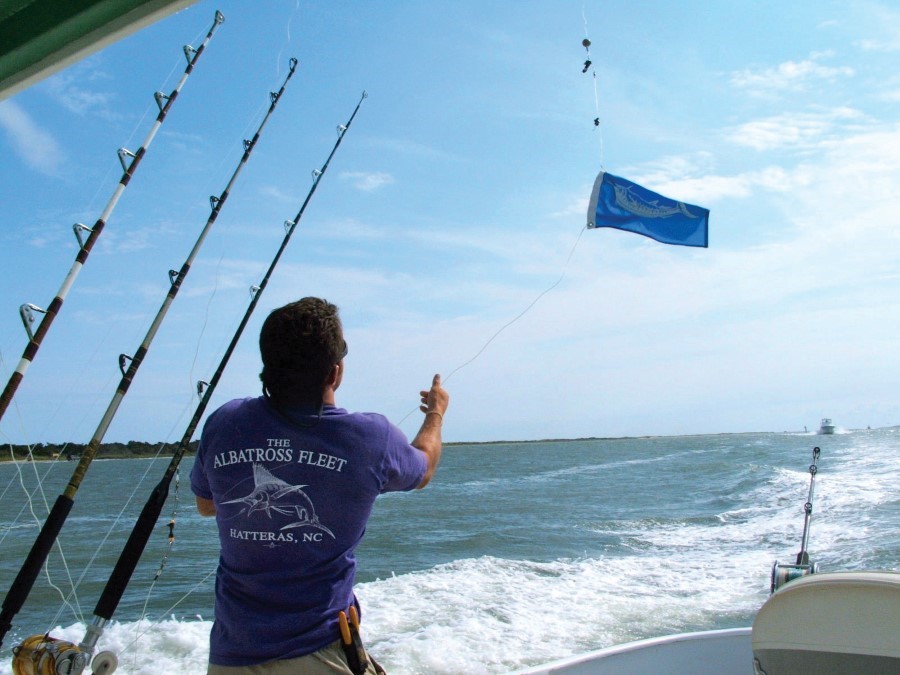 If you’re serious about catching a marlin, Captain Mattingly recommends booking two or three days to account for weather and opportunity. While you never know what catch awaits you on an angling trip from the shores of Hatteras to the warm, blue waters of the Gulf Stream, perhaps one fish defines the scope and power of what charter fishing can offer: the blue marlin. And who knows? Book a trip with the Albatross Fleet and maybe you’ll come home with a marlin tale of your very own.