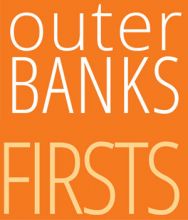 It's the beginning of 2014...the first part of the year. So, we've been thinking of all the Firsts that have happened here on the Outer Banks. Sure, you know some of the obvious ones that have been written about for decades - the Wright brothers' first flight, the first English child born in the New World, the first colonists. But we bet you won't know a lot of these unless you're a local historian or are of a certain age and grew up here.

THE FIRST HOTEL IN NAGS HEAD, complete with a grand ballroom and capacity for 200 guests, was built on the soundside in 1838.

Manns Recreation Center/Nags Head Fishing Pier was THE FIRST FAMILY RECREATION CENTER that boasted the first roller skating rink and the first merry-go-round for those warm, magical summer nights when families gathered to watched the smiling faces of their children speed in circles on roller skates or ride the painted ponies as they went round and round.

Construction of bridges ushered in a new era and is an often understated but very significant First that occurred in the 1930s. The construction of THE FIRST BRIDGE, the Wright Memorial Bridge, a 3-mile span across the Currituck Sound, provided an easily accessible route between the mainland and points north to the outside world for the village of Kitty Hawk and the barrier island chain to the south. In 1954 the Manns Harbor Bridge was built creating another dependable access for residents of North Carolina and points beyond to the dynamic barrier islands. In the mid-1920s the first ferry began operating between islands when Captain Toby Tillet established a tug and barge service across Oregon Inlet in South Nags Head. 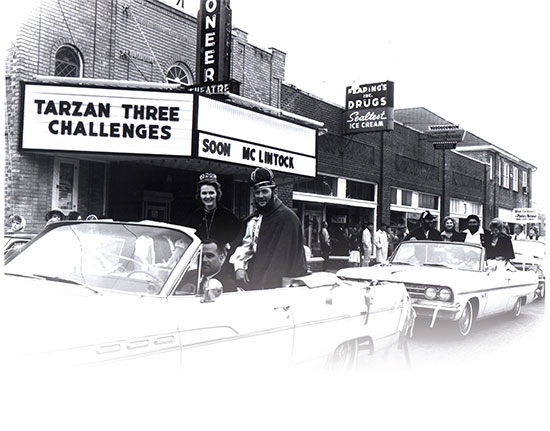 THE FIRST MOVIE THEATER, the Pioneer Theatre, located in Manteo, is the oldest theater in the nation owned and operated by one family since 1918.

In 1939 THE FIRST OCEAN FISHING PIER, Jennette's Pier, was built in Nags Head. In the 1950s fishing was king, and the islands quickly became known as a premier fishing mecca for all forms of recreational fishing. The first version of the Oregon Inlet Fishing Center was built in the 1950s by H.A. Creef and soon offered the finest charter fishing fleet services on the East Coast.

THE FIRST HOME TO HAVE MODERN ELECTRICITY, running water, an elevator and a swimming pool was the now-famous Whalehead in Corolla. Completed in 1925 by the wealthy Pennsylvania Railroad and American Sugar Refinery executive, Edward Collings Knight, Jr., for his wife, Marie-Louise Lebel Knight, the home is listed on the National Historic Registry and is a spectacular example of Art Noveau architecture and design.

THE FIRST DANCE HALL, the Nags Head Casino, was built in early 1930s and later purchased by Ras Wescott who ran this iconic institution for nearly 40 years.

THE FIRST STOPLIGHT in Dare County was in Manteo - at Budleigh and Highway 64 - installed in the late 1960s.

THE FIRST AMUSEMENT PARK with carnival-style rides and a large go-cart track was Dowdy's Amusement Park built in 1963.