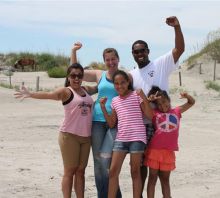 It all started with an internet search, a call to firm up our questions and a reservation. Within minutes a confirmation arrived in an email. It was as simple as that: We're going on a Corolla Wild Horse Tour!

The sun was hiding behind gray clouds on this hazy day, spring green colors were popping everywhere and the treetops were blowing on the breeze. After a scenic drive from Kitty Hawk, we arrived at Monteray Plaza at the Bob's Wild Horse Tours office for a quick check in before piling into a 4-wheel-drive open tour vehicle.

Tours to see the Corolla wild horses embark from Corolla, the last outpost before the road ends into nothing but stretches of wild beach. My husband spied several vehicles outfitted for horse tours, some with seating for up to 15 people and open air for the most part to make the most of the amazing views but also providing protection from the elements if needed. The most up-to-date equipment guarantees safety and a smooth ride.

As soon as we started traveling, our enthusiastic guide, Corey, began sharing information about the history of Corolla and its evolution from a desolate strip of sand to what it is today. It was amazing the facts he knew, and on top of that he was so funny and entertaining that we laughed the entire time. We later learned in talking with friends who had taken a tour with Bob's that this company and its sister companies, Corolla Wild Horse Tours and Back Beach Wild Horse Tours, have the reputation of having the best, most informed and most fun guides. We talked about the horses, the Spanish Mustangs of Corolla -- beautiful, wild horses that are proven to be descendants of the Spanish mustangs brought to the New World by explorers and colonists as long ago as the early 1500s. At one point, the horses were free to roam all through the Corolla area. However, with the boom in development and more cars and less land, the mustangs now are protected through the efforts of The Corolla Wild Horse Fund. There is a fence from ocean to sound that provides safety to the existing herd. The fence is at the end of the hard surface road. This is where our safari begins.

Our vehicle transitions easily between road and beach, and just like that we are riding along the surf break on a shell-strewn beach. I marvel at a flock of industrious birds grubbing in the sand. "Royal Terns," Corey informs. "I love birds. This is a great place to live if you like birds." He points out a flock of busy Sandpipers. We also see Turkey Vultures, Egret and Osprey. This guy really knows his feathered friends! A gorgeous mist is blending the entire scene together...beach into dune into sky into sea. We pass the remains of an ancient cypress forest jutting out of the sand, and as we turn to exit the beach and enter the wild realm of the horses, Corey states, "I've never not found horses."

True to his word, as soon as we cross over the dune we spot three horses grazing. Corey was so informative about each wild horse we encountered. He identified families, telling stories of the male stallions who fight over territory. We even saw one lone male with scrapes and battle scars. Keeping a respectable, legal distance between the horses and our vehicle, our guide was able to show us three separate herds consisting of full grown stallions, a mama and son and several mares all in the process of shedding their scruffy winter coats. 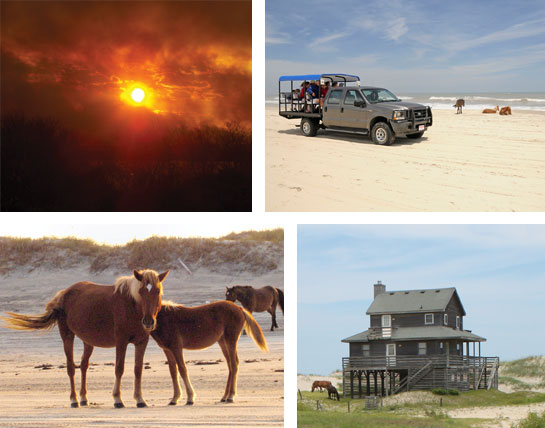 Not only did we learn about the horses (and birds) from our guide, but we also learned about the fragile ecosystem and the many species of wildlife and plants that coexist in this pristine maritime environment. We learned the history of the wild boars, about the grass plants that are endangered and are only known to be growing here and the native trees, Live Oak, Loblolly Pine and Wax Myrtle. There is also a rich history of the locals who call this rugged stretch home. It was more than we could have asked for in a tour guide.

As we made our way through the network of sand roads, up and over grassy dunes, we talked about the difficulty one would have trying to do this on their own. Corey was knowledgeable, in tune with the herd and he sincerely wanted to provide us with a memorable experience that only an insider can provide.

Before leaving we stopped on the top of a dune behind the Wash Woods Station, a life-saving station built by the United States Coast Guard in 1917. Corey told us this was one of his favorite views anywhere. The historic building and surrounding outbuildings appeared other-worldly with the ocean white caps rolling in the background. It was like getting a glimpse of the history and stories that have lived here for hundreds of years in this wild horse country and in the horses and on the wind.

Though we both felt we were connected to the Outer Banks before, Bob's Wild Horse Tour brought in a new appreciation for the rare and beautiful Spanish Mustangs of Corolla and for everyone who protects, respects and appreciates them. We left happy and amazed to be so lucky to have such a treasure so close to home. 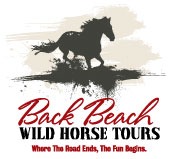 
About the Author Laura Martier

Free Half Pound of Fudge