Sanctuary for the Wild

It’s a sight you never forget. Your expedition has carried you to the shores of Carova to roam amidst high dunes and clusters of live oak trees — your eyes fixed on the horizon all the while. And then you see them, long and lithe, cantering in the ocean’s shallows and standing tall atop the dunes. Manes and tails billow in the wind, a seeming weightless contrast to their sturdy bodies, and in that moment, you know that they belong here. They’re wild, and that’s why you came.

The Colonial Spanish Mustangs of Corolla have fascinated visitors since they were first discovered living on the shores of the northern Outer Banks. There’s something about them that inspires awe — something you can’t quite put into words. And at the Corolla Wild Horse Fund, you don’t only get to see the horses … but you can also save them.

The mustangs had always roamed the village of Corolla and the area north of Duck, but in 1985 when the 17-mile stretch of road between the two towns was paved, the number of horse deaths spiked as more vehicles entered the area. Twenty horses were lost in an 11-year period, and the need for an organization dedicated to their wellbeing was becoming more apparent than ever before. The early founders of the Corolla Wild Horse Fund moved the 20 remaining horses that were used to the town to the beaches north of the paved road in Corolla to join the many wild horses already living there. They also constructed two sea-to-sound fences so that the horses wouldn’t wander out of their new 7,544-acre sanctuary.

Today, the Corolla Wild Horse Fund lives and breathes their charitable mission to protect, conserve and responsibly manage the herd. When you visit the Fund’s headquarters in Old Corolla Village, you can take a trip with a wild horse specialist to observe the mustangs and learn from the experts who are directly responsible for the herd. Get involved with the daily documentation or just sit back and enjoy the ride — and what a ride it is. 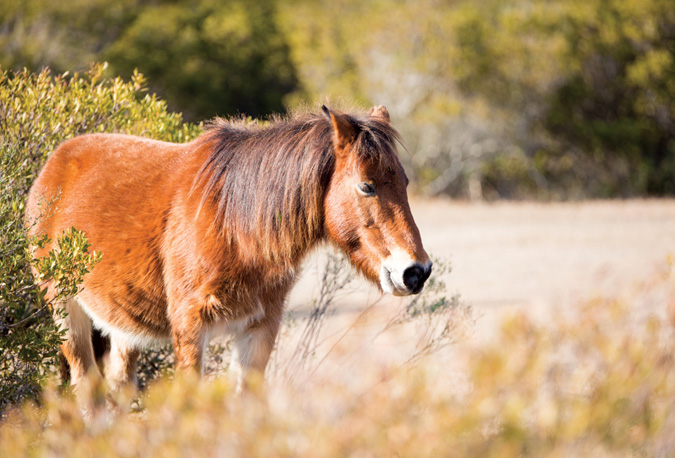 “There’s nowhere else in the United States where you can do what you do on this beach with these horses,” says Karen McCalpin, Executive Director of the Fund. “Here is an animal that is still wild and free — tough but also so stunningly beautiful. People will come back from a trip, and they are just so thrilled. I’ve been at this for almost 10 years now, and I still love the excitement.”

McCalpin says that the horses will move between 20 and 30 miles in a day’s time, so there are some mustangs that she sees far more often than others because of their territories. And the horses aren’t micro-chipped; the staff tells them apart by their markings, making the search part of the fun. Every tour includes a membership to the Fund, and the tours benefit the horses at the Fund’s rescue farm as well as in the wild.

Along with the Fund’s headquarters in Corolla, you will find one of two Wild Horse Museum Stores where activities are offered in the summertime such as children’s time with gentled mustangs that had to be removed from the wild and painting a wooden mustang. You can also learn about the Fund’s efforts to integrate new Spanish Mustangs into the herd for genetic diversity. The team brought over one stallion from the Shackleford Banks in 2014 and hopes to bring more in the future so the bloodline does not die out. 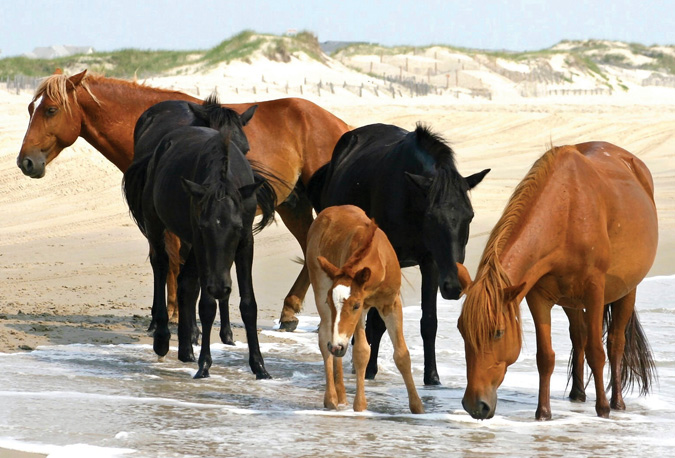 Although the sanctuary is designated as such for the wild horses, the land is actually a mix of one-third public land and two-thirds private land, and the beach itself is open to the public. This means the horses often spend time with visitors who may not be familiar with their demeanor and lifestyle in the wild.

There are two very important things to remember when visiting the horses, whether you are out with a tour or seeing them in passing on the four-wheel-drive beaches. First, the horses are not tame. You can enjoy them and photograph them, but you must stay at least 50 feet away from them by law. And second, these horses do not have the same diet that some tame horses may have. They can very easily die from being fed bits of food that are not a part of their diet, even things we may think of as treats like carrots and apples. So, please, do not feed the horses. In addition to placing their lives in jeopardy, it’s also against the law.

While on your next tour, keep an eye out for the herd’s newest filly, Morning Star — named for the star-shaped marking on her forehead. You’ll likely have a few first timers on the tour with you as well as folks who are back to visit the horses again. According to fans of the Fund, this is the kind of bucket list activity you don’t do only once.

Save $5 on each ticket when you book groups of 10 or more!