Above all, they love the house. The tour guides at the Whalehead in Historic Corolla are the first faces visitors see when they step through the door of the 1920s Art Nouveau-style home. A few of them in particular have become as famous as the house itself (well, almost) for their extensive knowledge of the home’s construction, furnishings and tales of ownership that began with Edward Collins Knight Jr. and Marie Louise Lebel Bonat Knight. We asked each of these prominent docents to guide us through their favorite room in the house, and the tours came riddled with historical fact and stories to make us smile.

Fred Bamonte and the Gun Room

Visitors follow him around to each of his posts – and with good reason. Fred Bamonte began working at Whalehead after he retired from a life of engineering, although retired seems to come with a wink when he tells you about working as a ranger at Bodie Island Lighthouse and volunteering at the North Carolina Aquarium on Roanoke Island in addition to giving tours at Whalehead.

Bamonte tells visitors to come see him at the aquarium the next day if they’ve struck up a conversation at the lighthouse, and Whalehead the day after that. He drives 35 miles each way on a Whalehead day purely because he loves the history of the house and interacting with visitors.

He said, “My favorite thing about working here is the people and the atmosphere that I try to create so that when they leave, they leave happy, and they feel that they learned so much.”

And create he does. Bamonte chose the gun room as his favorite in the house because it is the only room where the owners, houseguests and servants all mingled and spoke to one another on the same level. Mrs. Knight was included in this room because the 21,000-square-foot house was actually built for her when she was unable to frequent the all-male gun clubs.

The gun room is small in comparison to the grandiose library and dining room, but Mr. and Mrs. Knight spent a lot of time there planning excursions or discussing what went right and wrong after a hunt. The walls are lined with Winchesters and Remingtons that would have been used during the era, and a small, square table represents where the houseguests and servants sat while in discussion. Bamonte imagines the servants knew much more than visitors about the area’s plentiful waterfowl, which is why social boundaries were relaxed.

Fred Kunkel and the Library

This Fred is a romantic. Fred Kunkel always tells visitors to the home about the original owners’ passing. After leaving Whalehead for the last time in 1934, Mr. Knight died in ’36 from a heart attack at age 71. Within two months he was followed by Mrs. Knight at age 59. Kunkel says that Mrs. Knight was said to be an outdoors lady, very robust in health, so he attributes her early passing to heartbreak.

Kunkel good-naturedly states that his knowledge of the home is limited while offering up endless pieces of information about the former owners and rare furnishings. He loves that the home is ever changing with new discoveries.

“This is an evolving work in progress,” he said. “Our curator often will find something that corrects what we knew before, so a person who has been here will sometimes speak up and say, ‘Oh no that’s not what I heard.’ I like being able to then share with them, ‘Well, we keep learning more and more as time goes on.’

Kunkel’s favorite room in the home is without a doubt the library, which served as a gathering area for guests. The Louis Marjorelle furniture has “classic lines that no other furniture has,” and the Art Nouveau-style, 1903 Steinway piano catches the eyes of music lovers with its six uncharacteristic legs. A wedding or engagement portrait of Mr. Knight’s mother – no one is sure which – hangs over the fireplace.
“It’s so magnificently laid out in here,” Kunkel said. “It’s beautiful, and you look at the water; the water looks like crystals.”

A favorite piece of his is the piano, which is so special because Mrs. Knight requested the one-of-a-kind design from Steinway. She wanted a six-foot grand piano in the Art Nouveau style, which had very feminine legs and carvings of leaves and ivy. During the decades the house sat abandoned, the piano became filled with moss and mold, dirt and dust. It was one of the first restoration projects that took place when the house was reclaimed from the wilderness. Kunkel feels privileged after working for Whalehead for many years because his wife is invited to play the instrument.

The other piece that is special to him in the library is the grandmother clock, which is shorter and “shapier than a grandpoppy clock,” as Kunkel says. (Bamonte also joked the clock was named such because it is “slim, trim and beautiful like a grandmother.”)

Sarah Gornstein and the Kitchen

Following Sarah Gornstein around the estate, a question will never go unanswered. Gornstein is a wealth of information, and her passion for each detail is unwavering. After retiring on the Outer Banks in 2011, she decided to be a docent because she loves historic homes, especially this one. “I love interacting with the people,” she said. “I love talking about the house, and I love being in the house.”

Summer is the best time of year for Gornstein because of the thousands of visitors who flock to the canary yellow mansion. Large families and tour buses… bring them on! Gornstein says it is a myth that people only visit the house once; they return year after year often just to revel in its presence.

The room that speaks the most to her is the kitchen with its pink-tiled walls that are so vibrant in comparison to much of the servants’ area. Legend has it that the rose-tinted tiles were installed in honor of the Portuguese cook, Rose Alvernas, who was affectionately called Miss Rose. According to Gornstein, it was very fashionable in the era to have servants from Europe.

Gornstein jokes that while leading groups, it can be tricky to delay visitors from entering the pink room. “If they walk past the kitchen door, they just want to go right into the kitchen,” she said. “There are a lot of oohs and ahhs about that room because of the color and the light.”

Each of these tour guides shares a connection to the home and a belief that there is always more to learn about Whalehead. Bamonte said, “The end result is that I would not leave working here unless they made me, because I love this house.” 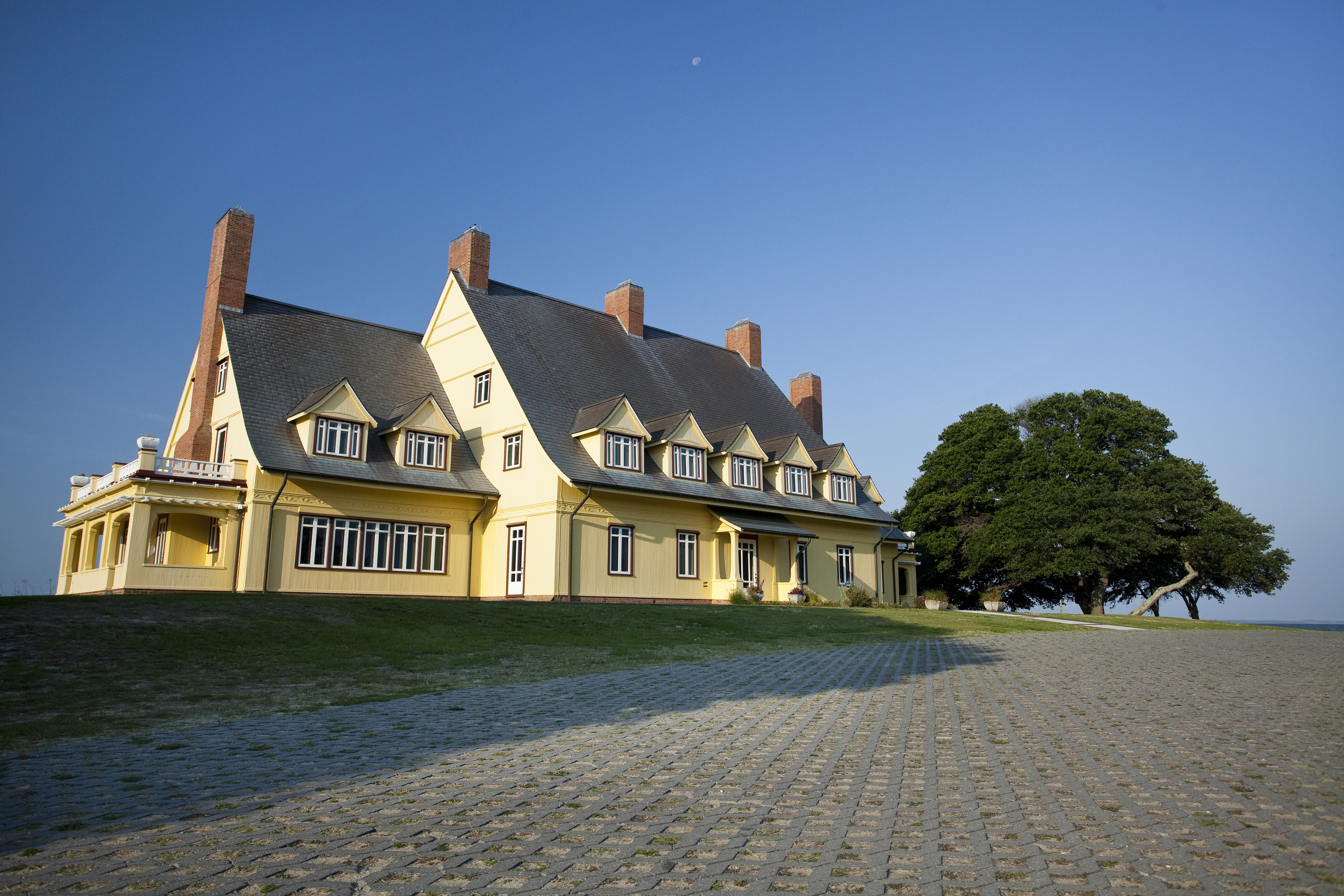 Whalehead has fantastic tours and events for all ages  almost year round. Get in on all the fun happening at  Whalehead. Go to visitwhalehead.com for details!