Cruising up N.C. Highway 12 to Uncle Ike’s Sandbar and Grill in the summertime, visitors are often greeted by a friendly pooch on the deck surrounded by admirers old and new. Spend a few minutes scratching him behind the ears, and you’ll probably notice a mouth-watering aroma (not the dog). It’s the scent of modern coastal comfort food waiting behind the restaurant’s doors. Upon entering, you are greeted by the chatter of happy customers, chalkboards boasting specials and brews on tap, a smiling staff with quippy one-liners on their tees and hundreds of dollar bills taped to the ceiling.

Co-owner and general manager Tony Northrup believes it’s all about connecting with people and having fun, evidenced by the new Twister board just installed in the middle of the dining room. At time of publication, Northrup joked that he had initially wanted to put it on the restroom floor. He thinks his fun-loving customers will play, especially when he throws in prizes. “It’s going to be right in between these two tables,” he said, gesturing toward the floor at dead center of the restaurant.

Between karaoke, live jazz music once a week and games like Twister, people come to Uncle Ike’s for the food. Families frequent the restaurant by day – often several days during their week-long vacation – and enjoy favorites like the fish tacos and award-winning crabby wings, which have been on the menu since Northrup and co-owner Jen Banzhoff purchased the restaurant in 2009.
At Uncle Ike’s you’ll find creative breakfast dishes such as lasagna (yes, really…try it!) or chicken and waffles and in the evening that premium cut of fresh, local mahi-mahi or scallops. Northrup said, “We keep it simple, but we serve good food.” 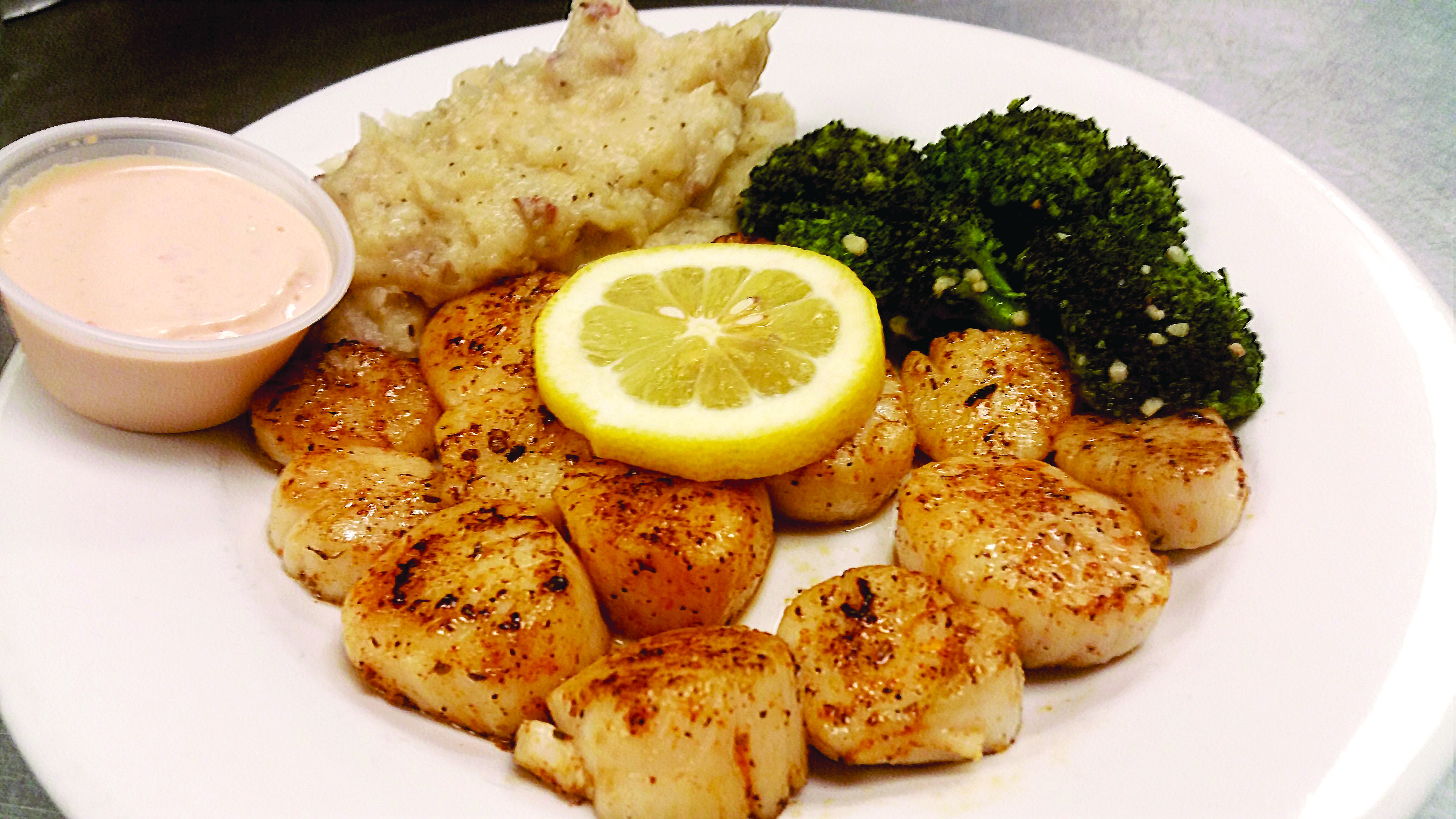 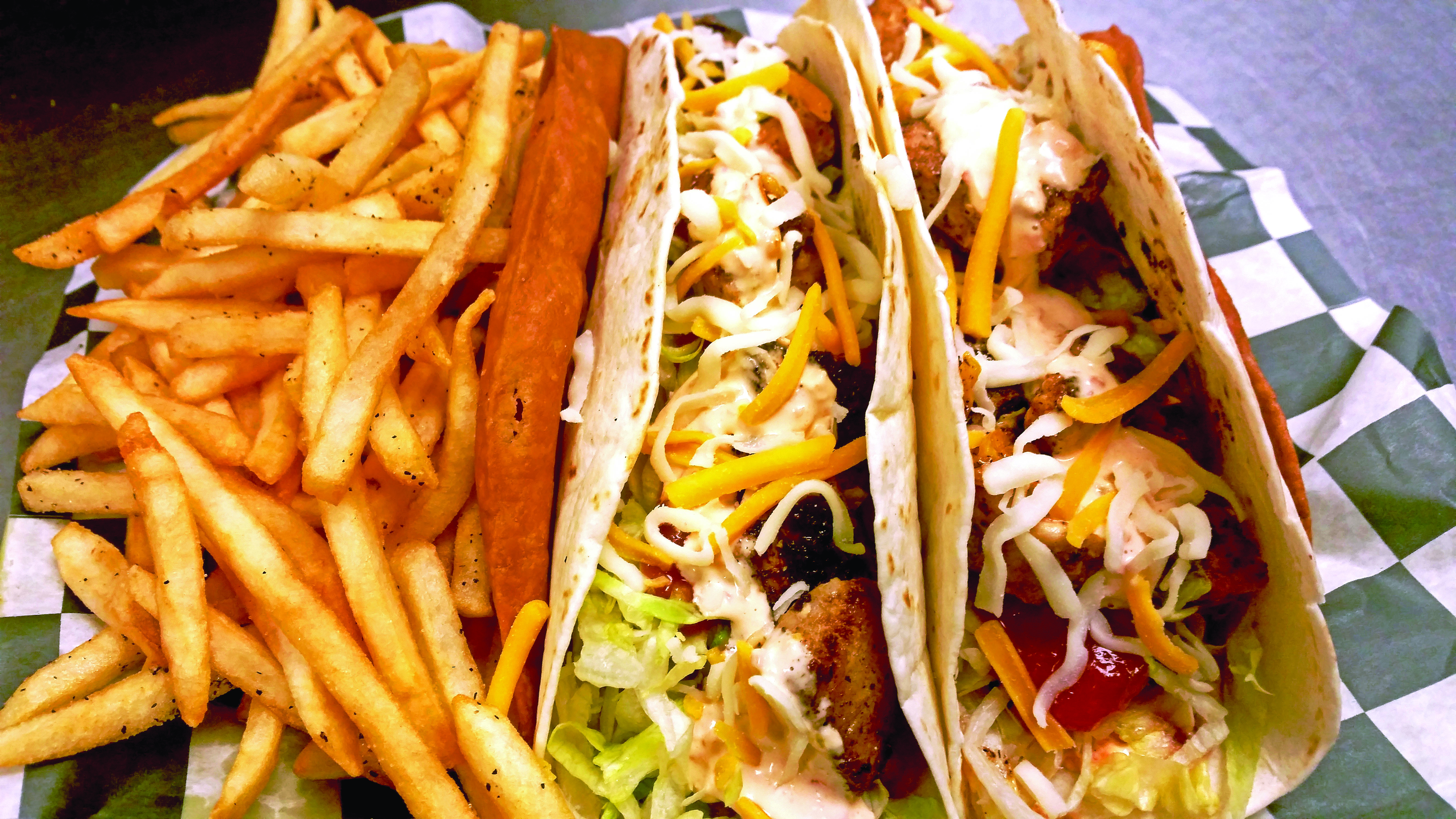 By night, do not be surprised to see 100-plus people packed in and around the little eatery. DJs, karaoke and live music draw crowds that spill out onto the covered deck, and there are plenty of other local bars within strolling distance. “We’ve created a bar hopping vibe up here,” Northrup said. “That’s what the nightlife is about in the (Corolla) Town Center.” In addition to a full liquor bar, Uncle Ike’s has 11 rotating beer taps. Along with local draft favorites Northrup likes to bring in some lesser known brews, such as those of Troegs Brewing Company from his home state of Pennsylvania.

When Northrup and Banzhoff first came to Corolla to work in the restaurant in 2009, it was known as Uncle Ike’s Rocking Roll Bar and Diner, and it closed at 10 p.m. every night. Northrup says that during his first two weeks of work, he didn’t have a single customer walk through the doors for breakfast or lunch. That did not dissuade him, though, because he saw untapped potential in Uncle Ike’s and purchased the restaurant with Banzhoff that year.

The duo also opened up Corolla Banquets and Catering, likewise located in the Town Center, as an event space and catering venture. The large banquet room and dance floor can be booked for rehearsal dinners and weddings. It also plays host to weekly events in the summer like a comedy club, teen night and all-you-can-eat crab legs. Parents who want to give their teens a fun night out can send them over to Corolla Banquets while they relax at the bar in Uncle Ike’s.

“We’re a lot of everything,” Northrup said, scanning through emails from customers on his phone. One patron sent in a photo of Northrup and his pup posing with sunglasses on, while another claimed her family had stopped into the restaurant every single day of their vacation.

Even if you have been to Uncle Ike’s before, the restaurant is ever changing in an effort to please its valued patrons with tantalizing new choices. This year, to keep up with the more health-conscious diners, Northrup added a quinoa burger as well as a stuffed portobella mushroom to the menu. He also installed a steamer, and he’s now serving homemade desserts from the nearby Northern Lights Bakery.

Plans are under way for a 50-seat expansion this fall, and it’s fun to imagine what ole Uncle Ike might be cookin’ up next.

As for the dollars on the ceiling, they are all donations from the restaurant’s staff and customers to Helping Haitian Angels, an organization dedicated to improving the lives of impoverished children in Haiti. Northrup says last year, the entire ceiling was covered in dollars. “It looked like a giant tree, so we are starting the tree again.”

Stop into this hub of activity for breakfast, lunch, dinner or late night, and make sure to bring your canine pals. Although the restaurant’s namesake, a Cherokee bulldog named Ike, is no longer around, the establishment pays tribute to him by allowing dogs on the deck.

$2 Off Breeze Thru T-Shirt