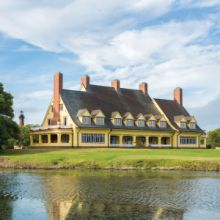 The story of a place like Whalehead has been written in words and images through the years. But these forms of history are, by nature, subjective as they are given to us through the eyes and thoughts of the beholders. Not so the story written in wood, glass and copper. That’s a story that is substantial, unchangeable and beautifully rendered.

Even when Whalehead had lost its shine and stood untended and somewhat desolate, the structural grace was still evident. Anyone who had the good fortune to have seen the house before its renewal and now, as it has been returned to its magnificence, will remember the elegant lines and still-fine interior features even in its neglect. You could stand in the Library 30 years ago, with its damaged walls and windows, and still feel the solidity of the structure and still see the dusty beauty.

I wonder if the men who originally built Whalehead thought of themselves as historians whose skill and attention to details would tell the story of this place in such chiseled detail close to 100 years later? Did they understand the significance of their building precision in terms of the longevity of the story? Might they have considered that we, almost a century later, would be able to learn about a bygone era through experiencing the structure itself as much as through any book we’d read or picture we’d study? I have to think some of them did because they created a superbly crafted legacy, not just a big hunting lodge. 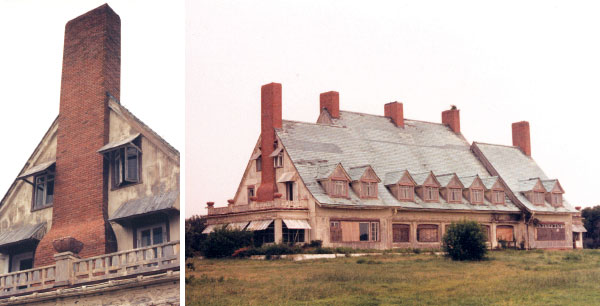 When Currituck County bought Whalehead and committed to a complete restoration, those in charge wisely understood that the skills needed were not only how to rebuild a wall or lay a new floor. They needed craftsmen who respected the house’s historic significance and structural integrity. They needed artists who created with saws and hammers. And that’s where Mark Persson came in.

Mark says that the minute he walked into Whalehead, he knew he belonged there – felt, in fact, drawn there. That was in 1999 when he answered an ad for carpenters needed to help restore the grand building.  He’s been there ever since as a contractor, the longest of anybody at Whalehead, and considers helping to bring the house back his life’s work. He came to Corolla from D.C. where his father owned a construction company and where he learned the art of old houses through restoring row houses and other historic structures in the capital city. He understood lumber species and had worked extensively with tongue and groove walls and old techniques such as balloon framing. When he encountered Whalehead, he says he saw the evident craftsmanship every place his eyes lighted. He appreciated the cypress exterior walls and the pine interior. He was impressed with how tight and sturdy the house still was, despite all, and due to the artistry that had created it. 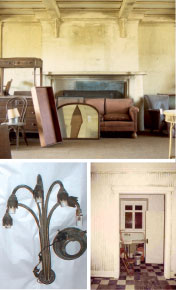 If eyes are the windows to the soul, then windows are the passage to the interior, and Mark redid every single one of them in Whalehead, starting with the plate glass one that had been installed in the Library. Every sash was redone, every awning-style hinge restored. The house began to shine again. He replaced wood that was rotted  – surprising little of it – and had wood custom milled to exacting 1/16th measurements. Authentic hardware was found for that that needed replacing. Cork floors were restored or replicated to recreate what was there. And, as the structural rebirth continued, Mark says that over and over he would discover originals contents from the house – bushel duck baskets and lids, door knobs, even furniture – secretly brought back to the house by those who wanted Whalehead returned to her glory.

In the restoration process, other secrets of the house also were discovered. While redoing walls, Mark found brown bottles of toothache medicine left on joists – touchstones to the era and a testament to the lack of dental care during the 1920s in Corolla. Also found in the walls were dog tags from a Coast Guardsman who was at Whalehead when it was repurposed as a base during the 1940s and an old American flag. And, while redoing the west porch, Mark and the workmen uncovered structural and trim wood that was labeled with the original builder’s name, Litchfield, as well as a designation that it was shipped from Water Lily, a small town across the sound from Whalehead where, interestingly, Mark now owns a home that looks across the water to the mansion. Mark explains that most all the wood came via the sound on a barge or down the beach from Virginia. Once at Whalehead, it was shaped and honed by hand saws and planes – see where the woodworker as artist comes in? 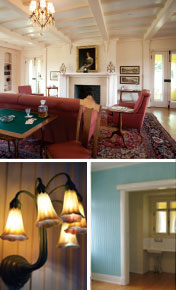 Capping the house with its copper roof was, truly, another piece of artwork. Gordon Sheet Metal Company from Elizabeth City had worked on Whalehead since the 1930s so were the obvious ones to tackle such a huge – and visible – project. Each of the 11,000 copper shingles had to go through 14 steps of cutting and bending to match the originals. Instrumental in bringing the interior furniture back to life was woodworker Bill Shelton from Moyock who handcrafted replicas of the dining room chairs with the water lily motif, even restoring the cushions with horse and hog hair padding. He also built an exact replacement of the Steinway piano bench that was never brought back to the mansion.

One of Mark’s final restoration projects was the boathouse at Whalehead. He tells the story of how one evening he had locked himself in, ready to spend the hours into the night working on the boat lifts. Glancing up from his work, he saw the faces of a father and son staring in through a window. After an initial start, he opened the door to let them in. Curiosity had led them to the lighted windows, and as it turned out, the father had grown up in Corolla and only recently moved back. They happily spent the evening with Mark as he showed them how Whalehead was coming back to its glory.

Mark says that he’s certain others long gone are also happy about the house’s rebirth. Many a night he has been the last one to close up the house, and as he has left he says he has felt escorted by energies that are pleased Whalehead is standing strong again…still telling the story of artistry, integrity and history written in wood.