Yo Ho Ho and a Bunch of Pirates! 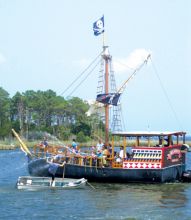 They mysteriously gather six times a day, every day, from Memorial Day to Labor Day - but only when the weather is warm and sunny...thunderstorms seem to keep them away. They're small - usually no more than 3 feet tall. They emit many noises - squeals, high-pitched giggles, an occasional whine. And, strangest of all, when they arrive they are relatively clean-faced, but within 20 minutes or so they're sporting curly mustaches or mermaid-looking markings. Who are these strange, little beings?!

Shivr' me Timbers! It's pirates...lots and lots of miniature pirates! And, darned if they aren't the cutest things in Manteo all summer long.

They descend on the downtown waterfront location to go on a Pirate Adventure, and as soon as they arrive, the timid join right into the fun and the bold become the biggest, baddest pirate they've ever imagined. Thanks to the face painting and costuming talent of the energetic staff (can you even imagine how energetic they have to be to corral all that little kid excitement?!), seemingly normal children are transformed into fearsome pirates, complete with mustaches, eye patches, swords and hats. There are also some who magically turn into lovely mermaids! 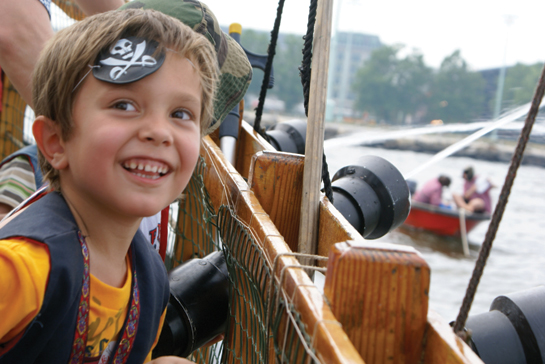 Then, off they march in a single line - as if practicing to walk the plank -- to the pirate ship, Sea Gypsy IV. You hear them shouting Ahoy Matey! and Arrrrggggg along the way, all to be prepared for the experience at sea they're about to have. They turn more than a few heads. Once on board, the pirating life becomes real. One look at their faces, and you know that most of them honestly think they're the real thing. This is big time adventure, better than any flat screen and graphics can give them. The ship sails out into the harbor, the wind hits their faces and, honest to Blackbeard, they're living the pirating life! 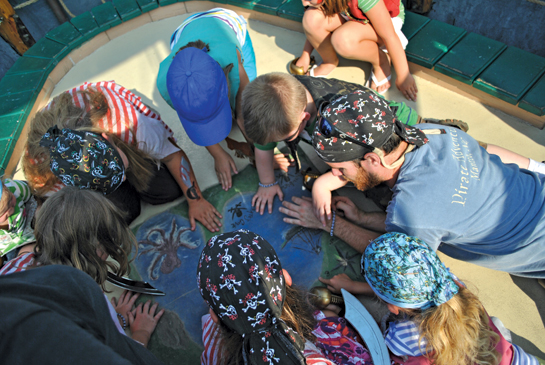 Attention is called by the Captain, and the rules of the sea are explained - even pirates have rules. Then the treasure map is brought out. Somewhere out there is sunken treasure that the kids must find. Everyone is on the lookout, and the ones with the keenest eyes notice the bottle floating by with a message in it! They discover that the smelliest, most rotten pirate sailing the seven seas, Pirate Pete, is nearby, and he has something the young scallywags need! To get it they must go into battle. Man the water canon! Shout pirate slurs! Show him you're the bravest pirate he's ever had to fight! Due exclusively to their pirating skills, Pirate Pete is, indeed, defeated and slinks back to his watery lair. Cheers erupt! Score: Kid Pirates, 1. Scruffy Varmint, 0. Happy kids turn their attention to the treasure as the Sea Gypsy turns for home port. 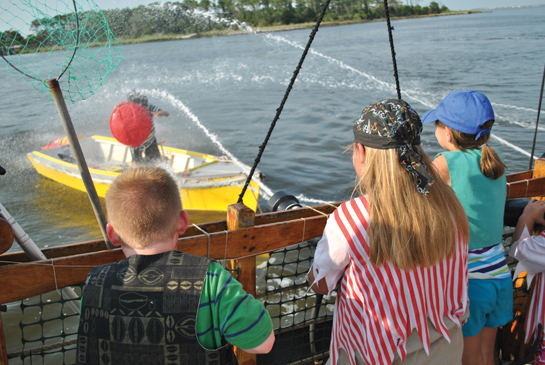 Reunited with their landlubber parents - the ones who didn't go out sailing with their young ones - there are fantastical stories to tell! I was the one who saw the bottle first! My cannon was the one that knocked Pirate Pete off his boat! I figured out the treasure map! I had more fun than anybody! At this point, it's hard to tell who's happier...the kids or the parents who scored big on bringing them here. 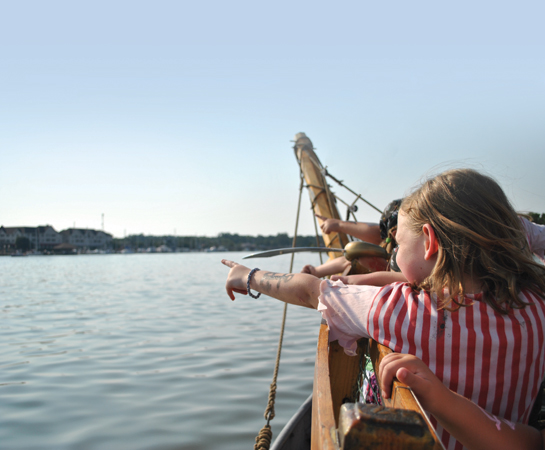 Either way, happy is happy. It sure works to make a hot summer day turn into a wonderous experience on the high seas.

$5 Off Purchase of Stunt or Power Kite

Must present coupon at time of purchase. Cannot be combined with any other offer.