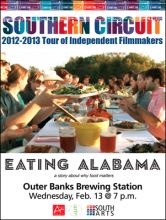 We've posted this special installment of the Outer Banks This Week blog to promote a unique event for the Outer Banks. The documentary film Eating Alabama: A Story About Why Food Matters will be shown Wednesday, Feb. 13 at 7 p.m. at the Outer Banks Brewing Station in Kill Devil Hills. Andrew Beck Grace, the film's writer, director and producer, will be attending this special showing to discuss the film with the audience. Come early to meet the director, and stay after for a Q&A session with this talented filmmaker. Information on tickets is included below...keep reading! And get your tickets early if you can. We suspect this event will be a popular one.

One of the things taken for granted in metropolitan areas is access to cultural activities not usually available to folks in the hinterlands (and, yes, we Outer Bankers live in the hinterlands). In addition to the usual big city fare of concerts, theater shows and major art exhibitions, urbanites frequently rely on the presence of a retro movie house or two showing less-commercial, independent or cult films. Our Big City Friends get to see films like Gasland, a Sundance-award winning documentary about the troubling effects on ordinary citizens of hydraulic fracturing for natural gas near their homes, farms and water sources. But we don't often see this type of film here.

Enter the Dare County Arts Council and its presentation of the Southern Circuit Film Tour throughout winter and spring. Southern Circuit brings some of the best independent filmmakers and their films from around the country and the world to communities all over the South. Over the years, audiences from more than 50 communities have viewed more than 200 films and engaged filmmakers in post-screening discussions. Southern Circuit transforms watching independent films from a typically solitary experience into a communal one.

Eating Alabama, an hour-long film by Andrew Beck Grace, is the latest installment in the 2012-13 Southern Circuit Film Tour series sponsored by the Arts Council. Showing at 7 p.m. on Wednesday, Feb. 13 at Outer Banks Brewing Station in Kill Devil Hills, the films tells the story of a young couple in search of a simpler life who return home to Alabama where they set out to eat the way their grandparents did - locally and seasonally. But as they navigate the agro-industrial gastronomical complex, they soon realize that although their families are steeped in agriculture, they no longer actually know a single farmer and nearly everything about the food system has changed since farmers last populated their family histories.

What ensues is a quest to acquire sustenance the way Americans did prior to the advent of Big Box groceries and corporate farms. Gathering together willing friends and family, they hit the road to meet farmers and like-minded fellow Alabamans, along the way discovering the qualitative difference between the locally sourced foods familiar to our grandparents and the commercially produced foods on which most of us subsist today. A thoughtful and often funny essay on community, the South and sustainability, Eating Alabama is a story about why food matters.

At 7 p.m. a brief meet and greet with the director will precede the showing, set to begin at 7:30 p.m. Locally brewed beers and locally sourced hors d'oeuvres will be provided by Outer Banks Brewing Station. A question and answer session will follow the film. Ticket prices are $10 for adults, $8 for students and $5 for children. Tickets can be purchased at the door or at the DCAC Gallery in downtown Manteo.

The next two films in the series will be Daisy Bates: First Lady of Little Rock showing Wednesday, March 15, followed by Follow the Leader on Wednesday, April 10. (Times and locations are to be determined. Check Outer Banks This Week and the Dare County Arts Council website for details as the dates near.)

April's feature, director/producer Jonathon Goodman Levitt's Follow the Leader, traces the experiences of three conservative 16 year olds - Ben, DJ, and Nick - who each dream of being President. Over three life-changing years, the three split into Republican, Democratic and Independent camps as each is forced to reconsider his political beliefs and career ambitions, and each set off on different paths.

It's not often that we get to view eye-opening films like these. Mark them on your calendar and don't miss this opportunity. See you there!