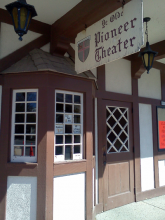 Downtown Manteo just isn't the same this week. With Ye Olde Pioneer Theater closed for renovations, you could play checkers in the middle of Budleigh Street tonight if you wanted to. Gone are cars parked two feet from the curb. Gone is the line of families chatting at the ticket booth. Gone is the smell of popcorn wafting from the door. (I know one man who eats Pioneer popcorn for dinner one night every week. I wonder what he is doing to get by ....).

But, if all goes as planned, this Friday night the beloved Pioneer Theater in Manteo will re-open with a brand-new digital format. Buddy Creef, the fourth generation of Creefs to run the movie house, says that there won't be a huge change for the viewer but that this conversion to digital is a big deal.

"This is the equivalent of going from silent to talking films," says Creef. "It's that big of a change."

Creef says that he and his father, H. A. Creef, decided to invest about $70,000 in the new digital equipment now because within two years the movie industry is going to be exclusively digital. Hollywood is going to stop making 35 mm film prints (which is what the Pioneer was using), says Creef, and he wants to be ahead of the curve. He didn't want to wait until too late and then not be able to get the equipment because of high last-minute demand.

"It was either not spend the money and ride out the current equipment or put the money in to keep it going," says Creef. "For me and Dad both, the choice was really obvious."

The Creef family has always said that The Pioneer is their gift to the community.

"We keep it open out of family tradition and community tradition," says Creef.

Creef says they don't make a big profit on the movies at the Pioneer, but they make enough to keep the theater going. They purposefully keep the prices low so that the locals can afford to come frequently, and they keep the movies family friendly. Movie tickets are still $5. Popcorn is $1 (add 50 cents for butter). Drinks are $1.50. Candy is $1. Creef says the prices will not increase right now because of the new equipment. As long as the theater is not losing money, Creef says, those prices will stay the same.

The Pioneer Theater is the oldest movie theater continually run by one family in the United States. And at 93 years old, it is truly a local landmark. It was founded by George Washington Creef Jr. (son of the famous boat builder) in 1918. The original theater was located about where the Roanoke Island Coffee Shop is today. In 1934, his son, Herbert Creef Sr., built the theater's current location. Herbert's son, George, took over the theater when his father passed away, and George's brother H. A. Creef, took over the theater when George passed away. If you've been to the Pioneer in the past 20 or so years, you likely remember H.A. in the doorway, greeting every customer, filtering out unruly children and, more recently, pilfering cell phones. Many a Roanoke Island kid has learned movie etiquette via Mr. H.A., as most islanders call him.

Friday night's movie - as long as "Hollywood" cooperates, says Creef - will be The Lorax. It will play Friday, through and including, the following Thursday night. One showing only, starting at 8 p.m. Call (252) 473-2216 for updates.

You know, Friday night also happens to be Manteo's first First Friday of 2012. If you're heading to the Pioneer, go way early and enjoy the celebration beforehand. Manteo is so much fun on a First Friday night. The stores and galleries stay open late, there's live music around town and everyone comes out of the woodwork to hang out downtown. The new Duck's Cottage Downtown Books and Toys also will be open late, with painter Christophora Robeers signing copies of her book, The Quiet Voice of the Outer Banks. Plan to have dinner downtown, too. Maybe catch Chickweed at Poor Richard's bar after the movie.

With the Easter vacation crowd and Spring Breakers coming into town this week, the Outer Banks is coming back to life. Restaurants, shops, attractions, recreation outfitters and produce stands are all setting up shop. The weather is actually looking a little cooler for the weekend -- in the low 60s through the weekend. That's kind of a letdown after 70s in March, but, oh well...

If you're looking for Easter activities, there are quite a few things going on...

Currituck Heritage Park has its Easter Eggstravaganza on Friday from 1 to 3 p.m. There will be lots of games and activities plus mustang rides with the Corolla Wild Horse Fund...

The Elizabethan Gardens is having its Easter Eggstravaganza on Saturday from 10 a.m. to 2 p.m. The egg hunt is fun, but there are also live bunnies, scavenger hunts, story times, photo ops, contests, games and more...

The Town of Nags Head is having its Easter Egg Hunt (what, no Eggstravaganza?) at Barnes Street Park starting at 1 p.m. It's always crowded, but they divide the kids up by age group to make it more fun.

Hatteras Island's Hoppin' Hatteras Easter Egg Hunt is in Avon on Easter Monday. It's at the Hatteras Realty office in Avon. From 11 a.m. to 3 p.m. they'll have hunts and activities for kids of all ages....

For the runners and walkers in your family, be sure to participate in the OBX Go Far Bunny Hop 5K and Jelly Bean Fun Run. It's Saturday at 9 a.m. in Kitty Hawk, and the funds go to a great cause - the Go Far running and character-building program in Dare County Schools....

Easter buffets and brunches abound on Sunday. I can't tell you about them all here, so you'll have to check our By Day listings. And have a good look at our Outer Banks Nightlife listings for the rundown on all the bands that are playing this weekend...

And be sure to enter our Facebook Giveaway this week - we've been giving away some great stuff! Have a hoppy holiday weekend!

This week you have a chance to win two free passes for a Manteo Sunset Sail with the Downeast Rover and a $25 gift certificate to the Full Moon Cafe!

For more information about Full Moon Cafe & Brewery, check out their website.

You won a free Corolla Wild Horse Tour plus a $25 gift certificate to the Route 12 Steak & Seafood Restaurant!

For more information about Corolla Wild Horse Tours, check out their website.

For more information about Route 12 Steak & Seafood Restaurant, check out their website.