Fishin’ For A Good Time 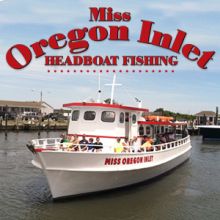 There are few things more relaxing than waking up with the sun to go fishing. In a place so driven by wind, it can be arresting to see the calm Pamlico Sound in the early morning and watch as your cast breaks the flat surface of the water. With the sun low in the sky and no one awake but your fellow anglers and the fish, it may seem like the most important thing in the world is you and your fishing pole.

“It’s not necessarily better fishing, but it’s one of my favorite times of the day,” said Randy Frees, captain of the Miss Oregon Inlet fishing vessel. “There are fewer boats out here so it’s a little more picturesque first thing in the morning.”

The 65-foot, red and white boat dubbed Miss Oregon Inlet has been running in Oregon Inlet for about 30 years and was the first head boat in the area. She is no stranger to fishing excursions and comes with three crew members at the ready — the experienced Captain Frees and two mates. The designation of head boat is not given because she is one of the larger boats docked at Oregon Inlet, as some believe, but rather because passengers can book fishing trips per head (per person) instead of paying for the entire boat to go out with only their party. 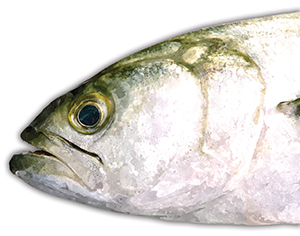 Often in the morning, Frees will welcome enthusiastic passengers to the boat and then make for the spot where he was catching fish the day before. While one of the mates is introducing the equipment and safety procedures to the passengers inside the cabin, Frees is networking with other captains in the inlet to determine where the fish are biting. He says, “We all work together here at Oregon Inlet. It’s a pretty good family network of guys. I look at it one day and help them, and the next day they may be helping me.” 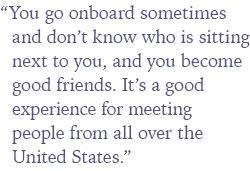 More often than not, the mate speaking inside the cabin will be John Booth (who also serves as relief captain), who has been working and fishing at Oregon Inlet since the ‘50s. Make sure to ask him about the old days, because he’s a great history buff and loves to talk about the Outer Banks and our changing inlets. He will tell you that he spent those years as a captain and mate with a compass and watch rather than electronics, and he enjoys head boat-style fishing, saying, “You go on sometimes and don’t know who is sitting next to you, and you become good friends. It’s a good experience for meeting people from all over the United States.”

Fishing rods, bait and tackle are supplied to the passengers, unless they’ve brought their own, which is encouraged too, and the crew is standing by to assist those new to the sport or to share their knowledge with experienced fishermen. 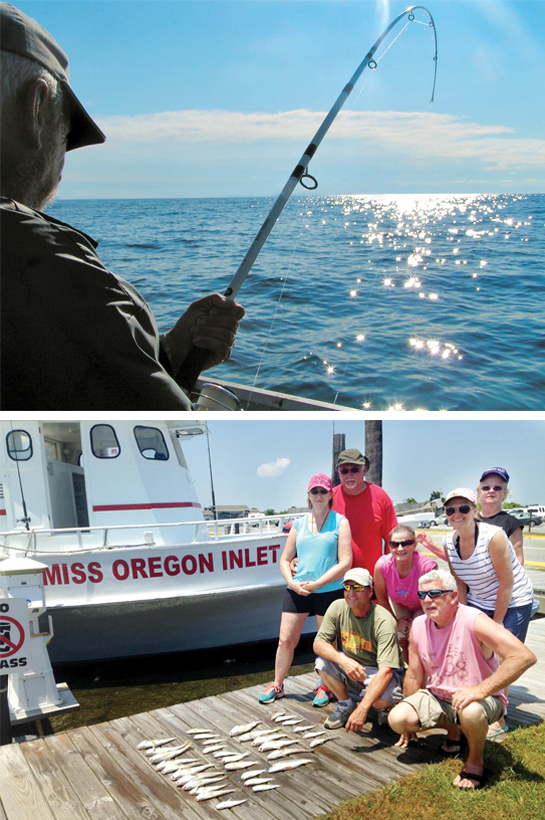 On any given day, you may find a bluefish or spot on the end of your line, or perhaps a croaker, grouper, puppy drum or speckled trout. Some fish are regulated by size in terms of holding onto them, like the sea bass (12 inches) and flounder (15 inches). “There’s so many different species in the sound,” Frees said. “As a matter of fact, over the years myself and the other head man who is running the Crystal Dawn would have a contest to see who could catch the most species. We’ve got 17 in a day before.” 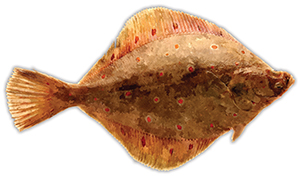 Frees is new to Miss Oregon Inlet this year, but he has been fishing professionally in the area for about 25 years and licensed as a captain for 16. Visitors who have taken trips aboard other head boats may have seen him at the helm, where he built many of his relationships with fellow captains at Oregon Inlet.

He likes to get the kids involved especially, letting them hold the fish after catching them and telling them tales of fishing trips past. A favorite for the youngsters is the pufferfish, which may inflate to twice its original size as a defense tactic. 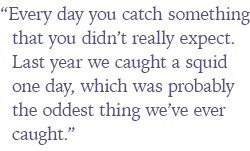 In addition to the day’s catch, passengers aboard Miss Oregon Inlet can spot any number of waterfowl and other marine life like turtles. Sometimes the head boat will pass by the island where pelicans roost, and Frees says fishing trips can often turn into dolphin watching trips when the porpoises are out to play. There have been non-living catches pulled aboard too, like ancient shells and even the occasional lost fishing rod. (The crew was able to get it back to the owner after calling it in to a local radio station.) “Every day you catch something that you didn’t really expect,” Booth said. “Last year we caught a squid one day, which was probably the oddest thing we’ve ever caught.”


The crew encourages passengers to take home their catch at the end of the day. Oregon Inlet Fishing Center will clean your fish for a small fee, and some local restaurants are even willing to fry them up for you. Just bring the fish — after calling ahead — and they will add the fries and slaw. But if you’re on board purely for the fishing experience, don’t worry; the crew is happy to take your spoils home to their own dinner tables. 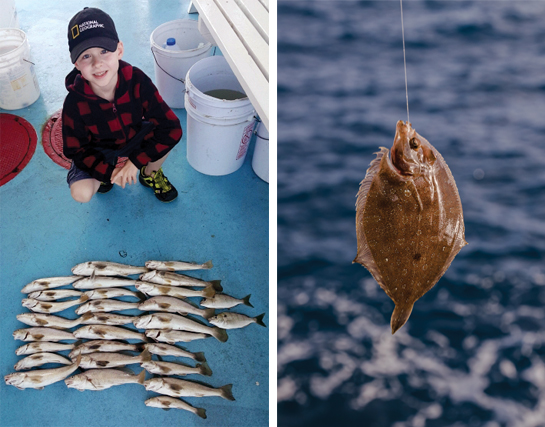 Miss Oregon Inlet departs on fishing excursions every morning but Sunday as well as afternoons most days of the week. Those that like to be on the water without necessarily getting their hands on a fish will enjoy the twilight cruise near the bridge if conditions are right. Frees said, “Here, at that time of evening when the sun is setting, it’s an absolutely beautiful view. A lot of times the wind dies down so it’s calm.” Passengers are welcome to bring coolers of soft drinks or beer and wine for the trip and will appreciate the restrooms located in the cabin. The boat is also available for special events such as weddings and private boat rides on some afternoons. Frees says the crew looks forward to a fishing trip organized by the Lion’s Club for the visually impaired each year.

From newbie fishermen to experienced anglers, and leisurely passengers too, the crew is ready to show everyone a good time on the water. And for those skeptical early risers . . . it’s worth it for the sunrise alone.

Save $10 on jet ski tours AND enjoy a free t-shirt per rider!